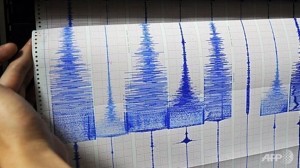 The governor of the southern Hormuzgan province, Ebrahim Azizi told state television that, “based on the preliminary searches, 15 people have sustained wounds which are not critical injuries, and one person is not in a good condition and has been hospitalised.”

He added that scores of villages have been damaged and that more detailed information would be available in the coming hours as rescue teams have been dispatched to the areas.

Earlier, the head of Iran’s Red Crescent rescue corps, Mahmoud Mozafar, told the Fars news agency that at least 11 people had been injured in five villages which were “severely” hit by the quake.

The Mehr news agency, quoted him as saying that “several houses were levelled” based on preliminary reports.

The USGS said there was a 35 percent chance of fatalities from the quake, which the Hong Kong Observatory measured at 6.1 magnitude.

Iran’s Seismological Centre has registered a series of aftershocks, measuring between 4.1 and 5.2.

Last month, the biggest earthquake to hit the country in 50 years, measuring 7.8, killed a woman and injured more than a dozen other people in the southeast.

At least 40 people were killed across the border in Pakistan where hundreds of mud homes were levelled.

Putting aside America’s longstanding enmity with Iran, and its more recent strains in relations with Pakistan, US Secretary of State John Kerry offered condolences and assistance with relief work.

Disaster relief contributed to an earlier thaw in relations between the United States and Iran, which — then led by reformist president Mohammad Khatami — accepted US personnel following the huge Bam earthquake in 2003.

In December 2003, a massive quake struck the southern city of Bam. It killed 26,271 people — about a quarter of the population — and destroyed the city’s ancient mud-built citadel.

Last August, a double earthquake, one measuring 6.2 and the other 6.0, struck northwestern Iran, killed more than 300 people and injuring 3,000.

It came a week after another struck near Iran’s Gulf port city of Bushehr, killing at least 30 people. The UN’s atomic agency said there was no damage to Iran’s nuclear power plant at Bushehr.

Iran’s Russian-built nuclear power plant at Bushehr was not affected by the country’s powerful earthquake and continues its operations as normal.

6.2 magnitude quakes in Hormozgan, Earthquake in Iran, Quoted May 11, 2013
Iran says nuclear sites safe from earthquakes and cyber threat
Iran to find out if political big hitters will run for president