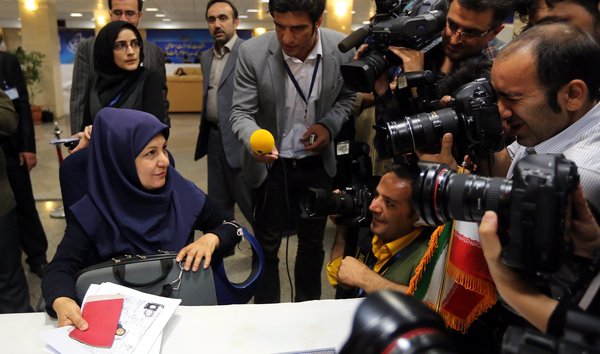 Prospect of Iran’s election stirs little hope this time around 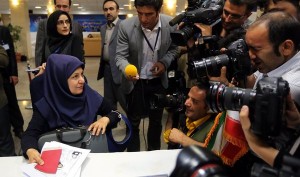 An Iranian professor, Soraya Malekzadeh, registered her candidacy for next month’s presidential vote on Wednesday in Tehran.

TEHRAN — Iran’s state television broadcast a live program on Tuesday in which passers-by were placed in a chair and asked what they would do if they were president.

One man said he would “work for the people.” A second jumped up when he heard the question. “I don’t want this chair!” he said.

Suddenly, a young woman grabbed the microphone. “This program is nonsense,” she said. “Those who really sit on this chair are only there to fill their own pockets.”

The program rapidly broke for a commercial, but it was a rare and revealing unscripted moment in the strictly controlled run-up to the presidential election on June 14.

Iran’s 2009 presidential election was an exuberant and exciting spectacle that aroused a powerful surge of optimism in the populace but that ended with the trauma of a violent crackdown. This year’s vote, taking place under starkly different circumstances, promises to be far more subdued.

For most, the enthusiasm of 2009 has been replaced, for now at least, with an indifference bred of fear and fed by a lack of charismatic candidates. There is little talk of a boycott, but no enthusiasm or expectations that the election will make any difference in people’s lives.

Today, most of the leading figures of the 2009 opposition — politicians, dissidents and journalists — have been silenced or fled the country. Many of them are still in jail, while the two presidential challengers and leaders of the so-called green movement, Mir Hussein Moussavi and Mehdi Karroubi, remain under house arrest.

Many still feel cheated, if not by the outcome of the vote, which many here viewed as fraudulent, then by the way their complaints were swept aside by security forces on the streets of Tehran.

“I gave my vote to Moussavi four years ago, and they answered me with their batons,” said Asiye, 32, a bookkeeper who, like the others in this article, did not want to be identified for fear of retribution. “I’m not saying I will not vote now, but if I do, it will be for the candidate that is most critical of the ruling system.”

As next month’s election nears, there are a few voices saying openly — and carefully — what many have been saying for a long time behind closed doors. On Saturday the former president Mohammad Khatami, himself long sidelined, blasted the “suffocating security atmosphere” in the country.

“The trust between the government and the people is torn,” he said. “The youths and middle classes have lost all their hope.”

But Mr. Khatami is an establishment figure, many here believe, perhaps tolerated by the government as one who lacks a strong following and poses little more than a rhetorical challenge.

In contrast to the carnival atmosphere of 2009, when people lined the streets night after night in the weeks leading up to the vote, now most potential voters are consumed by worries over the ailing economy, double digit inflation and insecurity over the political direction of the Islamic republic.

But there is no indication that people are interested in going back out on the streets, and if they vote, many say, it will be only to seek revenge on the system.

“Who can stand up to those in charge?” said Ali Akbar, 28, a muscular man standing in a bookstore on Enghelab Street in Tehran. “I will vote for him.”

But compared with other years, the playing field is extremely unclear, and emotions could change once the candidates declare their intention to run, which will happen by Saturday. The final candidates will be vetted later by the Guardian Council.

Besides the candidates fielded by the powerful traditionalist faction of clerics and Revolutionary Guards commanders, many in the country are waiting to see whether President Mahmoud Ahmadinejad’s right-hand man, Esfandiar Rahim Mashaei, will run. Ayatollah Ali Akbar Rafsanjani, a former president, is said to be considering it.

Despite the trauma of nearly six months of unprecedented street clashes in 2009, there is no talk of a boycott, even among the former opposition members. Neither are those who backed the green movement rallying behind one candidate.

“I will vote for one of them,” said Asiye, the bookkeeper. “They will end this horrible status quo.”

At a wedding recently near the city of Karaj, northwest of Tehran, two women summed up the dilemma facing those who live in Iran but are critical of the governing system.

“We need to elect the least worst of the bad,” Simin said as she ate a salad. “That way we might get some sort of change.”

But her friend Maral was not so sure. “Last time we saw what they did with our vote,” she said. “I will never vote again.”

Many in Iran’s larger cities say they are concentrating on their private lives. Melancholy has taken hold of many.

Just before a recent performance of “Your Eyes,” a monologue written and performed by the renowned actress Bahareh Rahnama, a former vice president, Mohammad Ali Abtahi, slipped in through a side door with his teenage daughter.

Mr. Abtahi, looking frail, smiled shyly after several people in the audience got up from their seats as a sign of respect.

He was among the first prominent Iranians to be declared an enemy of the state after the 2009 election. Months later he appeared in a televised mass trial, where he confessed to taking part in a plot to overthrow the government.

Now out of prison, he said a return to politics was not in his plans. “What would be the use?” he said. “There is no more place for us. They don’t listen to us.”

At one point in the play, Ms. Rahnama, 38, looked around the theater as tears rolled down her moonlike face, until her green eyes locked with those of the people in the first rows.

“Damn this cancer called nostalgia,” she sobbed. “Damn the past.”