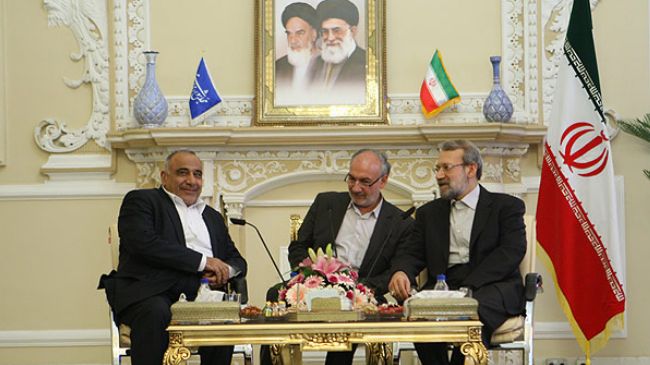 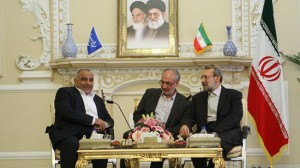 Iran’s Majlis Speaker Ali Larijani (R) and a member of the Islamic Supreme Council of Iraq (ISCI), Adel Abdul-Mahdi, meet in Tehran, May 8, 2013.

Iran’s Majlis Speaker Ali Larijani has stressed the importance of the relations between the Islamic Republic and Iraq, saying continued cooperation between the two countries will lead to regional stability.

“The continuation of cooperation and consultations between the two countries’ officials on important regional issues – the most important one being the situation in Syria – can result in finding rational solutions and the establishment of regional stability,” Larijani said in a meeting with a member of the Islamic Supreme Council of Iraq (ISCI), Adel Abdul-Mahdi, on Wednesday.

The unrest in Syria began in March 2011, and many people, including large numbers of Syrian soldiers and security personnel, have been killed in the violence.

He expressed hope that Iraq would proceed with plans to achieve progress in various fields.

Abdul-Mahdi, for his part, said Iran is an important and influential country in the region, adding that Tehran and Baghdad have enjoyed strong relations since the ouster of former Iraqi dictator Saddam Hussein.

He noted Iran and Iraq have growing cooperation in various political, economic and cultural fields, urging both sides to maintain the close ties to help defuse regional crises, including the unrest in Syria.