Iran’s letter to UN on Israeli strikes against Syria 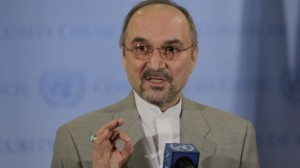 I wish to draw your attention to the reports on the Israeli air strikes against Syria on 3 and 5 May 2013.

The Islamic Republic of Iran expresses its deep concern over, and strong condemnation of such provocative and unwarranted attacks. We believe that such criminal and irresponsible act should be addressed by the International community, specially the United Nations and its relevant organs for the following reasons:

·These blatant acts of aggression are serious violation of international law, particularly the norms and principles enshrined in the United Nations Charter including its Article 2 (4) on the prohibition of the use of force against any Member State.

·Nothing can justify the use of force and act of aggression against a sovereign state and the aggressor must be held accountable for any consequences stemming from this condemnable and illegitimate act which endangers regional and international peace and security.

·It is obvious that the attacks represent serious escalation of tension and have grave destabilizing effects in the region.

I would urge Your Excellency to address this issue of great concern to the United Nations based on the mandate bestowed upon you by the Charter for the purpose of maintenance of regional and international peace and security and prevention of further act of aggression.

Please accept, Excellency, the assurances of my highest consideration.