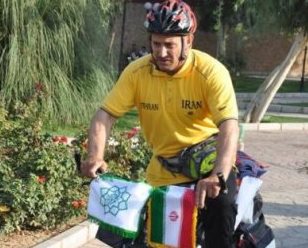 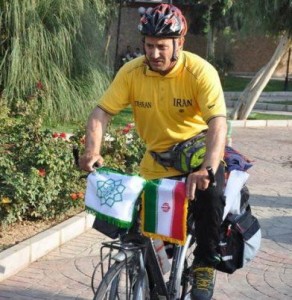 Ardebil, May 7 — An Iranian cyclist has ended his 20,000-km tour around Europe and Asia with the message of peace and friendship. Yavar Samadi, 45, rode to 20 European and Asian countries carrying a slogan of protecting the environment. Samadi, sponsored by District 19 of Tehran Municipality, started his Eurasian tour almost seven months ago. He ended his tour about two weeks ago.

He later went to Georgia and Russia where he planted a sapling as a token of friendship in the capital city of Moscow.

He continued his tour biking to Estonia, Finland, Sweden and Denmark.

Samadi also said his tour to the 20 nations cost him about 550 million rials.

The Iranian cyclist said he is to bike a 1,200 km course from Tokyo to Hiroshima in Japan next summer in the memory of the victims of the tragic atomic bombings of the cities of Hiroshima and Nagasaki by the US which took place during the final stages of the World War II in 1945.