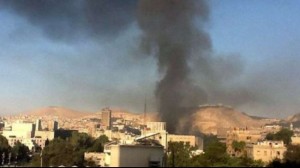 (Reuters) – Israel carried out its second air strike in days on Syria early on Sunday, a Western intelligence source said, in an attack that shook Damascus with a series of powerful blasts and drove columns of fire into the night sky.

Israel declined comment but Syria accused the Jewish state of striking a military facility just north of the capital – one which its jets had first targeted three months ago. Iran, a key ally of Syrian President Bashar al-Assad and an arch-enemy for Israel, urged states in the region to resist the Israeli attack.

People living near the Jamraya base spoke of explosions over several hours in various places near Damascus, including a town housing senior officials: “Night turned into day,” one man said.

The Western intelligence source told Reuters the operation hit Iranian-supplied missiles headed for Lebanon’s Hezbollah, a similar target to the two previous strikes this year, which have been defended as justifiable by Israel’s ally the United States:

“In last night’s attack, as in the previous one, what was attacked were stores of Fateh-110 missiles that were in transit from Iran to Hezbollah,” the intelligence source said.

An Israeli official had confirmed a similar raid on Friday. In Lebanon, Hezbollah declined immediate comment.

Video footage uploaded onto the Internet by activists showed a series of explosions. One lit up the skyline of Damascus while another sent up a tower of flames and secondary blasts.

Syrian state media accused Israel of attacking in response to Assad’s forces’ recent successes against rebels who, with Western approval, have been trying to topple him for two years.

In 40 years since a war with a Syria then ruled by Assad’s father, Israel has been locked in a cold standoff with Damascus, fought Hezbollah in Lebanon in 2006 and is threatening to attack Iran, accusing Tehran of trying to develop nuclear weapons.

But it is wary of instability in Syria, has long viewed Hezbollah as the more immediate threat and has shown little enthusiasm for U.S. and European calls for Assad’s overthrow.

The raid follows intense debate in the United States over whether the use of chemical weapons by Syrian troops might push President Barack Obama to intervene more forcefully on the rebel side, but Western powers remain concerned at the presence of anti-Western Islamist fighters among Assad’s opponents.

It was unclear whether Israel sought U.S. approval for the action; in the past, officials have indicated that Israel sees a need only to inform Washington once a mission was under way.

At a routine public appearance, Israeli Prime Minister Benjamin Netanyahu made no direct reference to the strikes but spoke pointedly of his responsibility to ensure Israel’s future.

He maintained a plan to fly to China later in the day, suggesting a confidence that, as with the raid in January, Assad – and Hezbollah – would limit any reprisal. However, an Israeli military source said the army had deployed more anti-missile defense systems near the northern borders in recent days.

“The sky was red all night. We didn’t sleep a single second. The explosions started after midnight and continued through the night,” one man told Reuters from Hameh, less than a mile from the Jamraya military research facility.

“There were explosions on all sides of my house,” he added, saying people hid in basements during the events.

Another witness spoke of fire near Qura al-Assad, a town around 5 km (3 miles) west of Jamraya where many high-level government officials live. In the center of Damascus, people said their first thought was that there was an earthquake.

Identified by Syrian media as the Jamraya military research center, the target was also hit by Israel in another assault on January 30. Jamraya, on the northern approaches to Damascus, is just 15 km (10 miles) from the Lebanese border.

The British-based Syrian Observatory for Human Rights said the blasts hit Jamraya as well as a nearby ammunition depot.

Other activists said a missile brigade and two Republican Guard battalions may also have been targeted in the heavily militarized area just north of Damascus.

Reports by activists and state media are difficult to verify in Syria because of restrictions on journalists operating there.

People living in southern Lebanon said they heard frequent sounds of jets overhead and believed they were Israeli.

The streets of central Damascus were almost empty of pedestrians and traffic on Sunday morning, the start of the working week. Only a few shops were open. Checkpoints that have protected the government-controlled zone from rebel attack appeared to have been reinforced with additional men.

Syria’s state television said the strikes were a response to recent military gains by Assad’s forces against rebels: “The new Israeli attack is an attempt to raise the morale of the terrorist groups which have been reeling from strikes by our noble army,” it said.

Speaking shortly before Sunday’s attack, President Obama said Israel had a right to act: “The Israelis justifiably have to guard against the transfer of advanced weaponry to terrorist organizations like Hezbollah,” he said.

In Israel, a military spokeswoman said of the attack in Syria: “We don’t respond to this kind of report.”

Netanyahu appeared at the dedication of a highway junction in memory of his late father. He made no reference to raids but said his father “taught me that the greatest responsibility we have is to ensure Israel’s security and guarantee its future.”

Israel has repeatedly made clear it is prepared to use force to prevent advanced weapons from Syria reaching Hezbollah guerrillas, who fought a 34-day war with Israel seven years ago.

Uzi Rubin, an Israeli missile expert and former defense official said the Fateh-110 missile “is better than the Scud, it has a half-ton warhead”. Iran has said it adapted the missile for anti-ship use by installing a guidance system, he added.

There was no immediate indication of how Syria would respond to Sunday’s attack. After Israel’s January raid, Damascus protested to the United Nations and the Syrian ambassador to Lebanon promised a “surprise decision”, but no direct military retaliation followed.

Iranian Defense Minister Ahmad Vahidi was quoted by the ISNA news agency as saying on Sunday: “The Zionist regime’s attack on Syria, which occurred with the U.S.’s green light, revealed the relationship between mercenary terrorists and their supporters and the regime occupying Jerusalem … The evil actions of the Zionist regime can threaten the security of the entire region.”

The uprising against Assad began with street protests that were met with force and grew into a bloody civil war in which the United Nations says at least 70,000 people have been killed.

Assad has lost control of large areas of north and eastern Syria, and is battling rebels on the fringes of Damascus.

But his forces have launched counter-offensives in recent weeks against the rebels around the capital and near the city of Homs, which links Damascus with the Mediterranean heartland of Assad’s minority Alawites, who have religious ties to the Shi’ite form of Islam practiced in Iran.

Opposition activists said hundreds of Sunni families fled the coastal town of Banias on Saturday after fighters loyal to Assad killed at least 62 people and left bloodied and burned corpses piled in the streets. It was the second such alleged massacre in the area in the recent days.