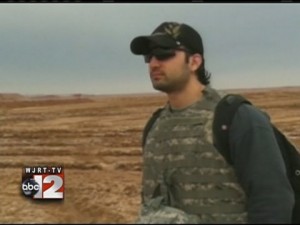 A former Marine incarcerated in Iran for nearly two years on suspicions that he was an American spy has been granted monthly visitations by an uncle in Tehran since March and has been permitted to send letters to his family for the first time, according to his sister, who interpreted the eased conditions as possible signs that Iran eventually could release him.

But the prisoner, Amir Hekmati, a 29-year-old American citizen of Iranian descent, has been denied repeated requests for a meeting with his court-appointed Iranian lawyer, said the sister, Sarah Hekmati. In a telephone interview, she said Mr. Hekmati and the family still did not know the precise charges he was facing, if any, more than a year after Iran’s highest court annulled a death penalty conviction against him and ordered a new trial.

When Mr. Hekmati, who is held in Tehran’s Evin Prison, asks why his case has not progressed, the sister said, “They don’t give him a good reason.”

Mr. Hekmati’s incarceration is one of a handful of politically delicate cases now confronting the United States in which its citizens are in the judicial custody of unfriendly powers. On Thursday, North Korea announced it had sentenced an American of Korean descent to 15 years of hard labor for hostile acts. Last week, the authorities in Venezuela said they were charging an American filmmaker with plotting to destabilize the country and incite civil war.

The Hekmati case became a source of friction between Iran and the United States after Mr. Hekmati, who was born in Flagstaff, Ariz., and served in the Marines for four years, visited Iran in August 2011 in what his family said was an innocent trip to see his grandmothers.

He vanished for three months and abruptly appeared on Iranian state television, confessing, apparently under duress, that he had been sent by the C.I.A. His family members, who live in Flint, Mich., were traumatized.

He was tried and sentenced to be executed as a spy, but the sentence was overturned and a new trial was ordered in March 2012, which Iranian rights experts said appeared to be part of a calculation on Iran’s part to use him as political leverage in its broader disputes with the United States.

His family then heard nothing for months, finding out later that Mr. Hekmati had been in solitary confinement, had gone on a hunger strike and had required emergency medical treatment for emaciation.

“We didn’t know until he had passed out on the floor of his prison cell,” his sister said. After that, she said, the conditions of his confinement began to improve, and “it was clear to our family they obviously don’t want him dead.”

She said Mr. Hekmati was no longer in solitary confinement, had received two visits from an uncle and had been permitted to write at least three letters to his family, in which he expressed sorrow for causing them such anxiety and assured them he is optimistic.

Mr. Hekmati’s family has been avidly publicizing his incarceration via a Web site and has been writing letters to Iranian leaders. The family’s anxiety intensified with the news last September that his father, a college professor in Flint, was suffering terminal brain cancer.

Last month the family met with diplomatic officials and lawmakers in Washington in attempts to further raise the visibility of Mr. Hekmati’s case.

A State Department spokesman, Patrick Ventrell, told reporters that “we are determined to secure his release and remain deeply concerned about his well-being in Iranian custody.”

Mr. Hekmati’s sister said State Department officials had arranged for the family to meet the Swiss ambassador to Tehran, Livia Leu Agosti, when she visits Washington later this month. The Swiss represent American interests in Iran, since the United States and Iran have not had diplomatic relations for more than three decades.

It is unclear why Mr. Hekmati’s lawyer in Iran, Mohammad Hussein Yazdi Samadi, has not been allowed to see him. Efforts to reach Mr. Samadi on Friday were not successful. But Iranian rights activists in this country did not necessarily view Mr. Hekmati’s lack of access to legal counsel as an unusual sign.

“No political prisoner is allowed to see his lawyer,” said Hadi Ghaemi, the founder of the International Campaign for Human Rights in Iran, a New York-based advocacy group.

The judicial authorities in Iran, he said, may have “reached the conclusion they cannot charge him with spying, and eventually have to release him.”

In another possible sign of movement in the Hekmati case, the United States last week released a visiting Iranian professor who had been held since December 2011 over suspicions he had violated export laws. Iran had expressed repeated concern about the professor, Mojtaba Atarodi, and his release, brokered by the government of Oman, was noted publicly by Iran’s Foreign Ministry spokesman.

Mr. Atarodi’s freedom did not go unnoticed by the Hekmati family. In a statement released on Friday, it said, “We offer praise to the governments of the United States, Iran and Oman for their work in returning Professor Atarodi to his family, a gesture we hope is reciprocated.”