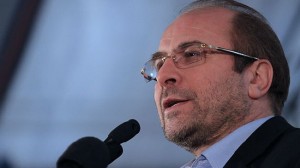 “I do not think it is correct to say that a candidate can change the foreign policy, or that he can resume or break relations [with a foreign country],” Qalibaf said in a speech at Shiraz University, the Fars News Agency reported on Friday.

“Foreign policy is a sovereign issue. In fact, the Leader makes the final decision… others are not decision-makers,” he stated.

The principlist hopeful was responding to comments made by some of his rivals, who have pledged to revise the country’s foreign policy.

“It is wrong to tell the society that the country’s problems will be resolved if we establish relations with the United States,” said Qalibaf, who is currently the mayor of Tehran, adding that Iran “should not be involved in disputes with other countries for no reason.”

Qalibaf is a member of the principlist Coalition of Three. The other members are former Foreign Minister Ali Akbar Velayati, a senior advisor to Ayatollah Khamenei, and MP Gholam Ali Haddad-Adel.

Hopefuls can register from May 7 to 11 for the Islamic Republic’s 11th presidential election, which will be held on June 14.