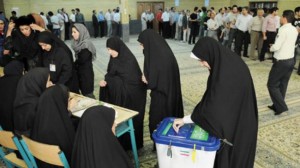 The Coalition of Five, the largest Principlist offshoot, says they will soon pick their nominee based on opinion polls. The group comprises of top officials like lawmakers Mohammad Reza Bahonar and Mohammad Hassan Aboutorabifard, and former foreign minister Manouchehr Mottaki.

Members of the Coalition of Three, another principlist offshoot, say the group is going strong, but refuse to take sides or name a nominee. The group comprises of Tehran Mayor Mohammad Baqer Qalibaf, Lawmaker Gholamali Haddad-Adel, and Ali Akbar Velayati, a top advisor to the Leader of the Islamic Revolution.

The Perseverance Front, another Principlist offshoot, has already picked former health minister Kamran Baqeri Lankarani as its nominee, with no intention to join others. Some Reformists and independents share the same idea. Despite their uphill struggle and speculations, they say they are not thinking in terms of coalitions.

It’s still too early to say how many hopefuls will register for the upcoming race or if they will pick just one candidate to represent them in the june 14 election.