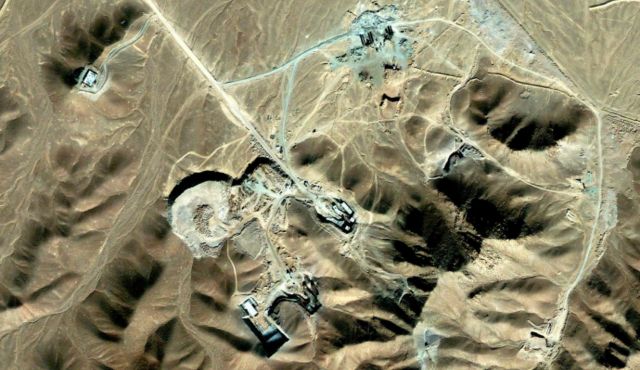 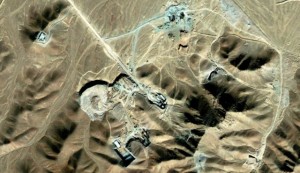 U.S. officials see development of the weapon as critical to convincing Israel that the U.S. has the ability to prevent Iran from getting a nuclear bomb if diplomacy fails, and also that Israel’s military can’t do that on its own.

Several times in recent weeks, American officials, seeking to demonstrate U.S. capabilities, showed Israeli military and civilian leaders secret Air Force video of an earlier version of the bomb hitting its target in high-altitude testing, and explained what had been done to improve it, according to diplomats who were present.

In the video, the weapon can be seen penetrating the ground within inches of its target, followed by a large underground detonation, according to people who have seen the footage.

The newest version of what is the Pentagon’s largest conventional bomb, the 30,000-pound Massive Ordnance Penetrator, or MOP, has adjusted fuses to maximize its burrowing power, upgraded guidance systems to improve its precision and high-tech equipment intended to allow it to evade Iranian air defenses in order to reach and destroy the Fordow nuclear enrichment complex, which is buried under a mountain near the Iranian city of Qom. The upgraded MOP designed for Fordow hasn’t been dropped from a plane yet.

The improvements are meant to address U.S. and Israeli concerns that Fordow couldn’t be destroyed from the air. Overcoming that obstacle could also give the West more leverage in diplomatic efforts to convince Iran to curtail its nuclear program.

“Hopefully we never have to use it,” said a senior U.S. official familiar with the development of the new version. “But if we had to, it would work.”

Fordow has long been thought to be a target that would be difficult if not impossible for the U.S. to destroy with conventional weapons. In January 2012, U.S. officials disclosed they didn’t think their largest bomb could penetrate to the centrifuges within the complex, where Iran refines fuel it maintains is intended for civilian use but the U.S. and its allies believe is destined for a nuclear-weapons program.

At the time, the Pentagon had spent about $330 million to develop about 20 of the bombs, and sought additional funding to make them more effective. That money came through; so far, the Defense Department has now spent more than $400 million on the bombs, which are built by Boeing Co., according to government officials.

U.S. intelligence agencies have concluded that Iran’s nuclear sites are so well fortified that Israel’s military alone can’t deliver what a U.S. official called “a knockout blow.” Even if Israel were able to obtain its own MOP—and U.S. officials said they haven’t offered it to its ally—U.S. officials said Israel doesn’t have stealth aircraft capable of carrying the bomb to its target deep inside Iran.

U.S. officials said they believe the enhanced U.S. bunker-busting capability decreases the chances that Israel will launch a unilateral bombing campaign against Iran this year and possibly next year, buying more time for the Obama administration to pursue diplomacy after Iran holds elections in June. Israeli officials declined to comment. Israeli officials maintain they reserve the right to attack Iran.

Defense Secretary Chuck Hagel and other senior American officials have told their Israeli counterparts in recent weeks that the Obama administration will look more closely at military options to deal with Iran’s nuclear program after assessing the impact of those elections on Tehran’s intentions.

The White House wants to find a diplomatic solution but hasn’t ruled out military action. In part to increase pressure on Tehran, both President Barack Obama and Mr. Hagel have used recent visits to Israel to stress Israel’s right to decide for itself whether to strike Iran.

Pentagon press secretary George Little declined to comment on the changes made to the MOP or the contents of Mr. Hagel’s meetings with Israeli officials.

The changes made to the MOP reflect a close U.S. analysis of what it would take to destroy Fordow. On the bomb itself, the detonator fuse has been adjusted specifically to withstand impact with layers of granite and steel that encase the nuclear facility, officials said.

The newest version is also designed to operate in “contested environments.” It is equipped with capabilities designed to counter Iran’s air defenses and keep the bomb on target if the Iranians try to knock it off course. Iran has invested heavily in recent years in air defenses and electronic warfare.

Officials said they believe the enhanced bomb would be even more effective against North Korea’s nuclear bunkers, which the U.S. thinks aren’t as heavily fortified as Iran’s.

The new version of the weapon also includes changes to the guidance system to improve precision. U.S. officials say precision is important because, if the U.S. decides to strike Iran, the Air Force may need to drop more than one MOP on the exact same spot to thoroughly destroy Fordow.

The idea is to create a crater with the first strike and then send other bombs through the same hole to reach greater depths.

Israeli officials remain skeptical that the Obama administration is prepared to strike Fordow and other nuclear sites, according to current and former U.S. and Israeli officials. That skepticism, officials say, has fueled calls within Israel’s government for a unilateral strike on Iran, even if Israel is capable of only setting back the nuclear program by a couple of years.

Israel still thinks its Air Force can do substantial damage to Fordow, according to Israeli and U.S. officials. U.S. intelligence agencies concur with that assessment. Mr. Hagel, during a visit to Israel last week, announced steps to supplement Israel’s military capabilities, though it is unclear how soon the new weapons systems and aircraft will arrive.

U.S. officials see Iran’s June vote as a critical test of whether the current Obama administration approach—using economic sanctions to try to shape Iranian public sentiment and bring the country’s hard-liners to the negotiating table—is having the desired effect.

U.S. officials said the U.S. and Israel have reached an understanding that they will assess the intentions of Iran’s leaders after the election, and then, barring progress on the diplomatic track, shift to a detailed discussion of military options.

U.S. officials said the elections won’t trigger an automatic shift from the diplomatic to the military track but would be a critical juncture in American and Israeli deliberations.

“The election is a milestone to determine whether or not Iranian intentions will shift,” a senior U.S. official said. The official said the review would take “some time” but declined to say how many months the U.S. and Israel have agreed to wait.

“We are committed to trying to resolve concerns about Iran’s nuclear program diplomatically. But, as President Obama has made clear: the U.S. will not allow Iran to acquire a nuclear weapon. The onus is on Iran and it knows that time is not unlimited,” she said.

U.S. and Israeli officials say they believe that Iran has stayed below an enrichment threshold set by Israeli Prime Minister Benjamin Netanyahu, in a bid to avoid a conflict with the West going into the elections.