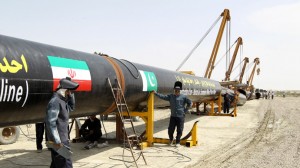 Iranians work on a section of a pipeline linking Iran and Pakistan after the project was launched during a ceremony in the Iranian border city of Chah Bahar on March 11, 2013. (AFP Photo / Atta Kenare)

ISLAMABAD, May 2 (UPI) — Pakistan aims to finalize the contracts necessary to start work on a section of a natural gas pipeline planned from Iran, a government official said.

Pakistani President Asif Ali Zardari and Iranian President Mahmoud Ahmadinejad met in March at the countries’ border to mark the start of construction for a $7.5 billion natural gas pipeline from Iran.

The project has faced a series of delays since it was proposed in the 1990s. The United States opposes the plan because of the potential financial benefit to Iran and its nuclear program.

A government official speaking on background told Pakistani newspaper The Nation said construction hinged on an engineering and procurement contract for the pipeline.

“We are hoping to finalize the ECP with Iranian contractors in a month or so to start the work without further delay,” the official said.

Iran offered financial assistance to Pakistan to help with construction. A delegation was expected in Pakistan in April, though the visit was postponed because of upcoming elections in Pakistan.

The Pakistani Foreign Ministry said it was too early to discuss whether India would eventually rejoin the project. The pipeline was touted originally as the Peace Pipeline, extending from the Persian Gulf through to India.

May 2, 2013
Azerbaijan presents note to Iranian Foreign Ministry over detention of its citizens
Capital market value hits $177 bln in Iran