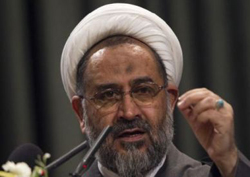 “A person who was one of the heads of ‘sedition’ during the 2009 presidential elections in Iran, should not misunderstand the fact that he has not been punished like the reformist leaders who were placed under house arrests,” he said.

Iranian authorities call unrests and demonstrations after announcing the result of presidential elections as “sedition”.

After the presidential elections in May 2009, Ahmadinejad’s rivals Mir Hossein Mousavi and Mehdi Karroubi clamed large irregularities in the results. Millions of Iranians also protested against the results.

According to the official results, Mousavi canvassed 13 million votes against Ahmadinejad’s 24.5 milion votes.

Mousavi and Karroubi were under house arrest for several months after the elections.

Iran is preparing to hold the 11th presidential election on June 14.

Rafsanjani and Khatami both have insisted on the necessity of holding “free elections” to unification of the country and solving economic and political problems.