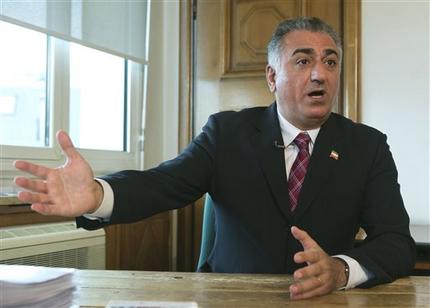 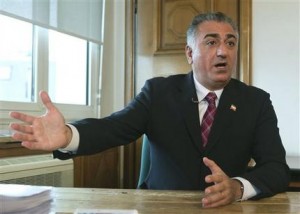 PARIS (AP) — The son of Iran’s toppled shah has a new job as spokesman for a nascent movement that is challenging the clerical regime to hold free and fair elections – or risk a civil disobedience campaign.

Reza Pahlavi said Thursday that his Paris-based collective, the Iranian National Council, brings together tens of thousands of pro-democracy proponents from both inside and outside Iran.

He said the council “is calling for a major boycott” of Iran’s June 14 elections but that “is not enough.”

“The regime once again is going to put on another show, another circus,” Pahlavi said in an interview. “This is an opportunity … to challenge a system that, if they were to refuse such a request, leaves us no choice but to organize a campaign of civil disobedience to ultimately force this regime to collapse.”

Iran’s 2009 presidential vote, which gave President Mahmoud Ahmadinejad a second term, was criticized for widespread fraud and led to major protests that were brutally repressed. The protests were the worst since the 1979 Islamic revolution that brought down Shah Mohammed Reza Pahlavi, whose family has since lived in exile, along with millions of other Iranians. The toppled shah died of cancer in Egypt a year after fleeing.

Pahlavi, 52, and the council want to hold Iran to international standards of fair elections.

The Iranian National Council elected Pahlavi as its spokesman at its first congress last weekend. The group’s political bureau appears to represent a variety of Iran’s exiled opposition, and Pahlavi insisted it is not a vehicle to promote a particular political cause.

“We’re not here to debate a form of regime. That’s not our job,” he said, adding that his organization transcends party politics and stands for a secular regime.

“We demand our right to have free elections in Iran, and so this council has the responsibility to help orchestrate this campaign, with the help of our activists at home and the support of the diaspora abroad,” he said.

It is impossible to measure the impact of regime opponents, especially those living in exile. Pahlavi, who moves between the Washington area and Paris, claims the council grew out of the contacts inside Iran of various members like himself. The group says half of the 20,000-plus people who signed its charter via the Internet are inside Iran.

Pahlavi called on the international community to add its voice to the campaign for free elections, which he said should include international observers.

External pressure can change the dynamics of a nation, he said, decrying what he said was a lack of dialogue with representatives of Iran’s exile community.

He said world powers today are mainly focusing on suspicions that Tehran secretly worked on atomic arms – a charge Iran denies. For Pahlavi, the world is seeking a “change of behavior” by Iran, while he and other regime opponents are seeking a new, democratic Iran.

“If you don’t engage this time with democratic forces, how can you expect them, with no defenses … to stand up to this Goliath?” he asked.