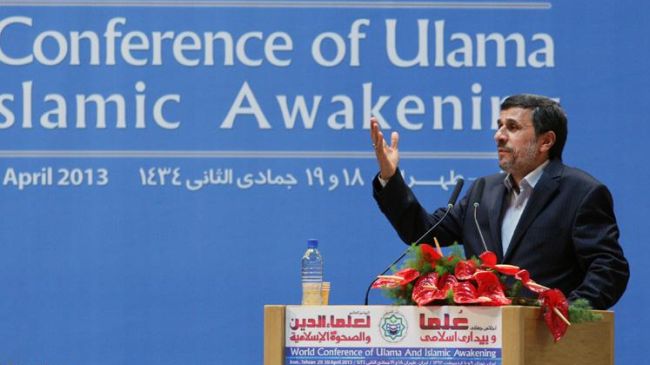 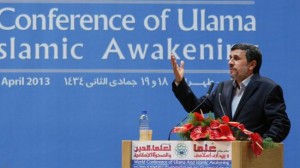 Iranian President Mahmoud Ahmadinejad speaks during the closing ceremony of Scholars and Islamic Awakening conference in Tehran on April 30, 2013.

He made the remarks at the closing ceremony of Scholars and Islamic Awakening conference in Tehran on Tuesday night.

“A majority of the world’s seven billion population live in poverty, while a minority of affluent people systematically plunders their wealth, and instigates war and bloodshed to dominate them,” Ahmadinejad stated.

The Iranian president called on the world’s Muslims to make efforts to understand true Islam, which is against violence, oppression and tyranny, in order to put an end to divisions and differences among themselves, adding that only true Islam can bring global justice and development.

The Iranian president also stated that the Palestinian territories have been occupied for over 60 years by the Zionists — “the history’s most uncivilized butchers, who easily humiliate, incarcerate and kill the Palestinian people.”

He went on to say that the Israeli regime does not want peace in the region and that the era of Zionism, oppression and tyranny has come to an end.

Almost 700 clerics and scholars from Muslim and non-Muslim countries participated in the two-day international conference that opened with an inaugural speech by Leader of the Islamic Revolution Ayatollah Seyyed Ali Khamenei.