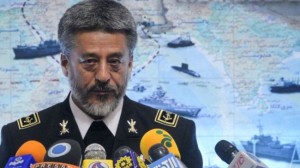 “Currently, the Navy’s [25th] Fleet of warships, comprised of Alborz destroyer and Lark logistics warship, is at the entrance of Bab el-Mandeb Strait,” the top commander said on Wednesday.

“The fleet will dock at Oman’s Salaleh port in the coming days,” the Navy chief added.

He added the fleet is on a mission to provide security for Iran’s trade routes in the Gulf of Aden and the Red Sea.

In line with international efforts against piracy, the Iranian Navy has been conducting patrols in the pirate-infested Gulf of Aden since November 2008 in order to safeguard merchant containers and oil tankers owned or leased by Iran or other countries.

The Gulf of Aden, which links the Indian Ocean with the Suez Canal and the Mediterranean Sea, is one of the world’s busiest shipping lanes.

Sayyari said the Navy plans to send another fleet to Southeast Asia, the Mediterranean or South Africa by March 2014.

The 25th Fleet left Bandar Abbas on April 7 after the 24th Fleet successfully conducted its 72-day mission in international waters and returned home on April 4.