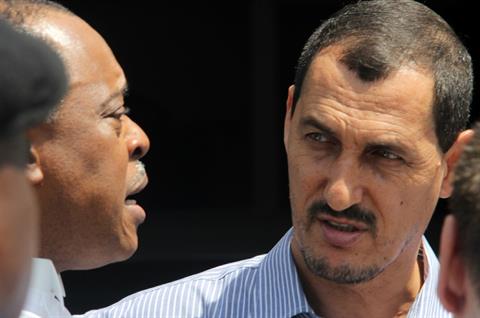 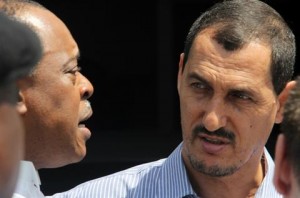 Azim Aghajani (R) is pictured on April 30, 2013 outside the Federal High Court in Lagos before the judge postponed his verdict against him.

LAGOS: A Nigerian judge on Tuesday postponed his verdict against an alleged member of the Iranian Revolutionary Guards who is charged with an illegal arms shipment.

Azim Aghajani, who has been held in detention pending the verdict, was in court alongside his alleged Nigerian co-conspirator, Ali Abbas Jega.

Judge Okechukwu Okeke said he needed more time given the complexity of the case, promising a verdict on May 13.

“We are still very hopeful that at the end of the day we will be victorious,” he said outside the court.

The pair were arrested in 2010 after 13 containers of weapons were discovered at the Lagos port of Apapa and have been on trial since February 2011.

Prosecutors have alleged that Aghajani was seeking to export weapons to the west African nation of Gambia on behalf of the powerful and secretive Iranian force.

The Iranian has denied ties to the Revolutionary Guard, insisting he was a private businessman conducting a legitimate transaction.

The charges attracted wide international attention, in part because it raised questions over whether Iran had violated UN sanctions on weapons sales.

The United Nations added Aghajani to a blacklist last year, labelling him a Revolutionary Guard member tied to “Iranian support for terrorism and extremism worldwide”.

Also in 2012, the United States put Aghajani on its national sanctions list.

Jega has claimed he was told the cargo contained construction materials and said he was hired by the Iranian to help clear the shipment through the Nigerian port.