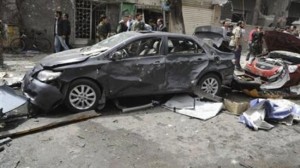 On Monday, Mehmanparast denounced the incident, in which six people were killed, and expressed his condolences to the victims’ families.

The Foreign Ministry spokesman stated that the attack reveals the true face of terrorists, and responsibility for the attack rests on the shoulders of those elements that are openly backing them.

He also called on all the countries of the world and international human rights organizations to support a political solution to the Syria crisis and to make efforts to bring a halt to the bloodshed in the country.

Earlier in the day, a bomb attack targeted al-Halqi’s vehicle in Damascus, but he survived.

The bomb was detonated in the al-Mazzeh neighborhood as Halqi’s convoy was passing through the area.

In an interview recently broadcast on Turkish television, Syrian President Bashar al-Assad said that if the militants take power in Syria, they could destabilize the entire Middle East region for decades.

“If the unrest in Syria leads to the partitioning of the country, or if the terrorist forces take control… the situation will inevitably spill over into neighboring countries and create a domino effect throughout the Middle East and beyond,” he stated.