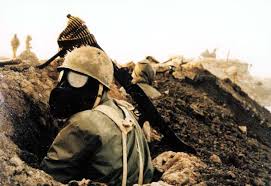 “On this Remembrance Day, I urge the international community to intensify efforts to rid the world of chemical weapons, along with all other weapons of mass destruction. Let us work together to bring all States under the Convention and promote its full implementation. This is how we can best honor past victims and liberate future generations from the threat of chemical weapons.”

During the 8-year Iraq-Iran war between 1980-1988, Iraq under the leadership of Saddam Hussein purchased chemical warfare agents from countries like the US, then Soviet Union, Germany and others and used them against the Iranian people and soldiers.

It is commonly known the effects of exposure to mustard gas are respiratory cancers, eye lesions, skins disease and psychological effects amongst other ailments.

The biggest tragedy occurred in the city of Sardasht in West Azerbaijan in northwestern Iran with 12,000 inhabitants, 8,000 of whom were exposed to the deadly substance of mustard gas.

According to Iraqi studies Saddam had ordered the use of 19,500 chemical bombs, 54,000 chemical artillery shells and 27,000 short-range chemical rockets during its invasion of Iran.