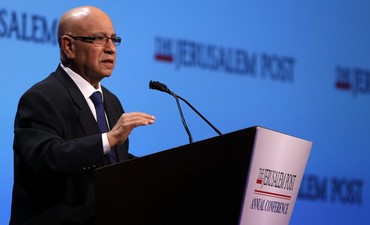 Dagan: Iran not only an ‘Israel issue’ 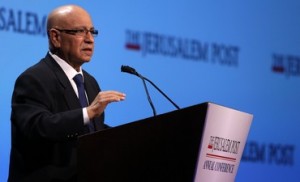 NEW YORK – Prime Minister Binyamin Netanyahu harmed efforts to prevent the nuclearization of Iran by focusing the world’s attention on the potential for an Israeli strike on Iranian nuclear facilities, former Mossad chief Meir Dagan said on Sunday in a joint interview with The Jerusalem Post and The New York Times at the 2013 Jerusalem Post Annual Conference in New York.

Dagan’s appearance at the Post conference was his first in public since he received a liver transplant in 2012. Despite his recent ill health, he started his speech by saying he was pleased to be in New York as it was “better than the alternative.”

Asked about his health, he said he felt as if he was in the “garden of Eden.”

Dagan caused an uproar when he criticized Netanyahu in the past on the Iranian issue, and he said his opinion had not changed. The former Mossad chief said that for the first time in Israel’s history, Israel and progressive Arab states had mutual interests. Saudi Arabia, the Gulf states and Azerbaijan were much more threatened than Israel, he said.

“To threaten an immediate attack on Iran is not beneficial to Israel,” Dagan said. “It transferred the Iranian issue from a worldwide issue to an Israeli issue. I would have been happier had [US President Barack] Obama made his announcement that he would not let Iran get nuclear weapons in Riyadh and not in Jerusalem.”

Dagan called Netanyahu “a clever man,” but added that the prime minister “was perceived as involving himself in internal issues in the US and interfering in the American election and went too far.” This was not helpful for the goal of maintaining US-Israel relations, he said.

On the Palestinian issue, Dagan called for widening the talks to include Arab countries. The Saudi peace initiative could be an important basis for such talks, he said.

Israel can have a secret dialogue with those countries. That would widen what we would receive.”

On Syria, Dagan downplayed the chemical threat and the threat of an Islamic takeover of the country. But he said Israel could carefully support Jordanian forces in Syria and express moral outrage to President Bashar Assad’s atrocities.

“We as Jews cannot be silent when Assad executes his people,” he said. “We have to present a moral approach. We have to take a stand.”

During his speech, Dagan told conference attendees that despite Assad’s many war crimes, the use of chemical weapons in the Syrian civil war was a “local decision,” and it was “not approved by the Syrian government.”

Dagan said that he was hesitant to “make an estimation” Assad would “leave soon.”

He added, however, that he was confident in making the prediction that the Islamic regimes being established in the wake of the Arab Spring “won’t be a big threat to Israel,” and he agreed with former prime minister Ehud Olmert’s contention that there “is no immediate” traditional military threat to Israel in the short term.