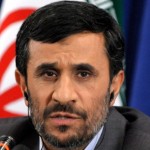 According to Baztab, on Sunday morning, during the welcoming ceremony for President Ahmadinejad, he was attacked by a number of people who lost their money in a credit institution.

Iran’s Isfahan University of Technology in cooperation with three other universities has started to design and construct eight kinds of submarines, including missile-launching WIG crafts (Wing in Ground craft) and cable laying vessels, Mehr reported.

Jafar Ghaderi, a Member of Parliament’s Budget and Planning Commission says to FNA that the Commission attempts to review the budget bill of Iran’s current year by the end of this week, expressing hope that the Parliament would put the current year’s budget on its next week’s agenda.

Following the approval of the new Islamic Penal Code by Iran’s Guardian council, the law will be implemented from early next month, Vice Chairman of Iranian Parliament’s Judicial Commission Seyyed Hamidreza Tabatabaee says to Fars News Agency. According to this law, girls’ age of criminal responsibility was raised from 9 years to 15 years.