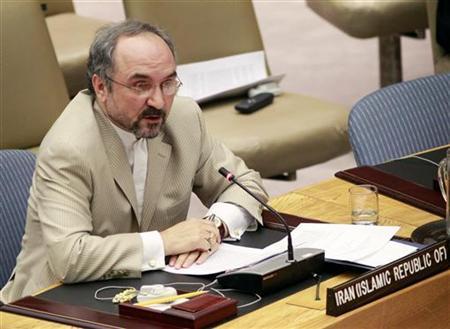 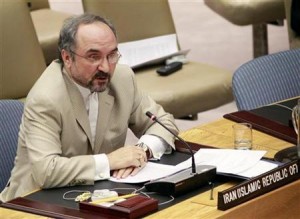 Khazaei, who is also the head of the Non-Aligned Movement (NAM) at the UN, along with the permanent UN envoys of Egypt, Venezuela, Indonesia and Cuba and a group of experts met President of the United Nations General Assembly Vuk Jeremic on Saturday to discuss the key issues regarding the high-level meeting of the General Assembly on nuclear disarmament, which is scheduled to be held on September 26, 2013.

The UN General Assembly adopted the resolution for holding the high-level meeting in 2012, upon a request by the NAM member states.

Khazaei called on Jeremic and UN Secretary General Ban Ki-moon to devote their efforts to hold an organized and comprehensive meeting with the extensive participation of the world’s heads of states.

The NAM representative pointed to the nuclear stockpiles of some world powers and underscored the need for nuclear disarmament across the world, particularly in the Middle East.

He pointed out that Iran, as the rotating president of the NAM, will adopt any measures required in the lead-up to the UN nuclear disarmament meeting in September.

Jeremic, for his part, expressed gratitude to Iran and NAM for their efforts in this respect and reiterated his readiness to offer cooperation to convene a successful meeting on nuclear disarmament.