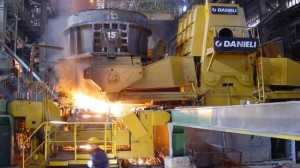 Tehran – Iran has ranked first in the Middle East region for steel production, said a senior official at Iranˈs Mines and Mining Industries Development and Renovation Organization (IMIDRO) on Saturday.

He said according to a report by the World Steel Association, Iran was the worldˈs 15th steel producer in 2012, while in 2011, the country had stood at the 17th place.