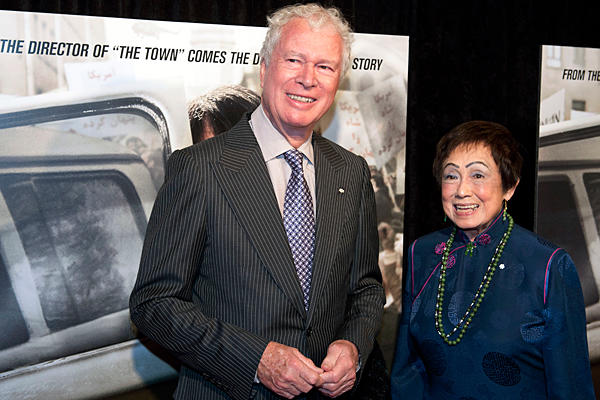 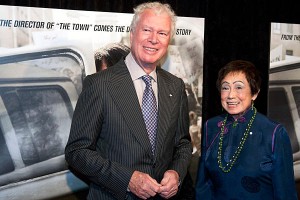 Canada’s envoy to Tehran at the time of the Islamic revolution and the US hostage crisis, says Argo disappointed him and that he’s worried about where Iran’s nuclear program might lead.

Former Canadian Ambassador Ken Taylor is neither the James Bond lookalike he hoped might portray him in the Hollywood blockbuster “Argo” nor is he quite the Austin Powers double he says might have been a more accurate choice.

But he’s achieved some name recognition in the US since the 2012 movie swept theaters and the Academy Awards, and he has plenty to say about Iran in 1979 and the country it has become since.

Mr. Taylor was Canada’s ambassador to Tehran in 1979 when the US embassy there was stormed and dozens of Americans were taken hostage. Six Americans escaped and spent months holed up with him, waiting for their extraction.

Those months are the premise of the Ben Affleck-directed movie, which Taylor mildly says took “a bit of poetic license.”

Speaking before a gathering of the New England Canada Business Council in Boston yesterday, Taylor, who now lives in New York, joked that after friends saw “Argo” at the 2012 Toronto Film Festival, they called him and said, “I thought Canada was involved.”

According to Taylor, he replied, “That’s odd, So did I.”

As the tense months of being trapped inside the embassy wore on, Taylor tried to reassure the Americans that they would be home by Thanksgiving, then Christmas, then the Super Bowl. He warned the US that “they’re going to wonder if Washington forgot about them.”

Taylor revealed little about the actual operation that got the six men and women safely back to the United States. But, he joked, at least the movie showed that he “opened the front door of the embassy with great dexterity.”

When Taylor arrived in Tehran in 1977, “the country was booming.”

There were rumors that Mohammed Reza Shah Pahlavi – more commonly referred to as simply “the Shah” – was preparing to buy Pan American Airways. It did not seem like the “stalwart of the West” was going anywhere.

For all the blame heaped on the Central Intelligence Agency (CIA) for not predicting the Islamic Revolution, almost nobody saw it coming, he said. Afterward, the Ayatollah’s secular advisers told Taylor that even they didn’t expect the Shah’s government to fall like it did.

Revolutionary fervor did not sweep up the whole country the way it seemed to be portrayed in “Argo.” And Taylor said a great disappointment for him was the way the movie portrayed Iranians, some of whom became “marvelous friends” with him during his posting in Tehran.

Too many sanctions, too little talking

He is on board with the growing chorus of voices in Washington urging the Obama administration to ease up on its sanctions-heavy approach to negotiations with Iran although he acknowledges that Iran needs to give ground too.

When asked his opinion of whether Tehran has nuclear weapon ambitions, he cautions that “Iran is an opaque society,” and there’s too little information to guess.

“I think they’ve got some military use in the back of their mind,” he says. “But they don’t want to destroy themselves … Maybe they are working at capabilities, but not necessarily producing [a nuclear weapon].”

That the military option for halting Iran’s nuclear development is “on the table” worries Taylor, who points to the wars in Iraq and Afghanistan as cautionary for anyone considering going to war with Iran.

“A bombing mission would be a fatal error. It would solve nothing,” he says. “It would postpone [Iran’s nuclear program] for two to three years,” but nothing more, because Iran’s nuclear facilities are too dispersed.

He says, “I wake up every morning hoping [the military option] is still on the table” – instead of being used.