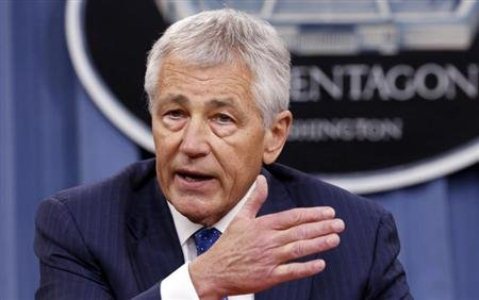 With eye on Iran, Hagel seals US arms deal with UAE 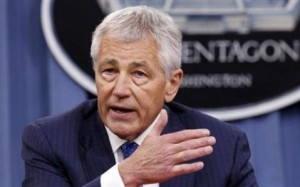 ABU DHABI: US Defence Secretary Chuck Hagel will meet United Arab Emirates leaders on Thursday to wrap up a major arms deal that both nations see as a way to thwart Iran’s military power.

Hagel arrived in Abu Dhabi on Wednesday on the last leg of a six-nation tour of the Middle East in which he has sought to renew ties with American allies who share Washington’s concerns over Iran’s nuclear project and Syria’s civil war.

Before his departure, the Pentagon announced plans for an elaborate weapons sale to Israel, Saudi Arabia and the United Arab Emirates, including more than two dozen F-16 fighter jets to the UAE at a value of nearly $5 billion.

By endorsing the deal, the UAE has demonstrated “its trust in the United States” as a reliable partner, said the official, who spoke on condition of anonymity.

The arms sale, which involves a long-term commitment to train UAE pilots and provide spare parts, shows “that the US isn’t going anywhere, that the United States is firmly committed to the security of all our regional partners,” the official said.

The F-16 deal — and the perceived threat posed by Iran — will be high on the agenda Thursday evening when Hagel meets Sheikh Mohammed bin Zayed Al-Nahayan, Abu Dhabi crown prince and deputy head of the UAE’s armed forces, officials said.

Located only about 56 kilometres (35 miles) from Iran across the Strait of Hormuz, the United Arab Emirates is anxious about the prospect of a nuclear-armed Iran as well as the consequences of a possible Israeli pre-emptive strike to prevent Tehran from attaining an atomic arsenal.

As Iran’s uranium enrichment has progressed along with its missile programme, the UAE has spent billions beefing up its air power and missile defences.

The UAE also has backed tough sanctions against Iran despite extensive trade and commercial ties with its northern neighbour.

Dubai, the second-largest emirate after Abu Dhabi, hosts a large Iranian diaspora and much of Iran’s imports and exports flow through Dubai’s bustling ports.

Hagel flew to Abu Dhabi from Cairo in a trip that has included stops in Israel, Jordan and Saudi Arabia.

US defence officials said grave worries about Syria’s conflict came up in all of Hagel’s meetings, amid renewed fears the Damascus regime may have used chemical weapons.