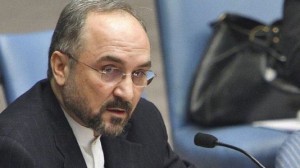 Iran’s Ambassador to the United Nations has dismissed Israel’s allegations against Tehran, describing the Tel Aviv regime as a source of insecurity in the region.

Addressing a UN Security Council session on the situation in the Middle East, Mohammad Khazaei said Israel is a source of threat and crisis in the Middle East as it continues to violate international rules and possesses nuclear warheads.

He added Iran has officially announced that it remains committed to the principles of the UN Charter, which ban any threat or use of coercion against a UN member.

This is while the Israeli regime, which is in possession of hundreds of nuclear warheads and has a long black record of terrorist activities, should stop threatening other countries and abide by international laws and the UN Charter, Iran’s UN envoy underlined.

The Iranian representative’s comments came in response to the unfounded allegations by the Israeli UN ambassador about Iran.

Regarding the Palestinian situation, Khazaei, who was speaking on behalf of the Non-Aligned Movement (NAM), said the movement is deeply concerned about the Zionist regime’s brutalities against Palestinians and condemns Tel Aviv’s continued settlement activities.

He added that the movement also decries the continued imprisonment of and the use of torture against thousands of Palestinians, including women, children and officials, and demands the release of all Palestinian inmates.

NAM calls on the international community to take a swift measure to stop Israel’s settlement activities, the demolition of Palestinian houses and the transfer of Israeli settlers to the Palestinian lands, he said, adding the movement also calls for the lifting, in full, of the Israeli blockade on the Gaza Strip.

Khazaei said the UN Security Council should send a clear message to Israel that it has to put an end to all its illegal activities and comply with international regulations.

On the situation in Syria, Khazaei said that Iran believes any sort of military intervention in the Arab country could only exacerbate the situation and lead to the spread of insecurity to other countries in the region. He said the only solution to the unrest in Syria is to set in motion a comprehensive peaceful political trend geared at stopping the violence and holding a national dialog between the opposition and the Syrian government.

Syria has been experiencing unrest since March 2011. Many people, including large numbers of Syrian soldiers and security personnel, have been killed in the violence.

The Syrian government says the chaos is being orchestrated from outside the country, and there are reports that large numbers of the militants are foreign nationals.