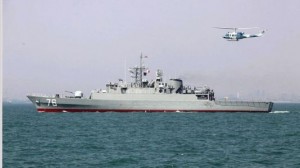 A top Iranian commander says the Islamic Revolution Guards Corps (IRGC) Navy is a symbol of national might and plays a determining role in the security equations of the Persian Gulf region.

When the US got involved in a direct war with Iran during the imposed eight-year Iraqi war to tip the balance of power in favor of [executed dictator] Saddam Hussein’s regime in Iraq, our naval forces made the US regret the imprudent entry into the war, Deputy Commander of the IRGC’s Navy Rear-Admiral Alireza Tangsiri said on Wednesday.

He further said that the IRGC’s Navy has such great power that the enemy would not even dream of any adventurism in the Persian Gulf region.

On January 15, Brigadier General Yahya Rahim Safavi, a senior military adviser to Leader of the Islamic Revolution Ayatollah Seyyed Ali Khamenei, said Iran is the main power providing security in the Persian Gulf and ensuring the safe passage of energy supplies through the strategic body of water.

“Iran, as the major power in the Persian Gulf, guarantees energy exports from the region”, the brigadier general underlined.