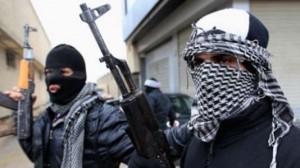 The allegation, made on Lebanon’s Future Television, echoes similar comments by George Sabra, interim leader of the Syrian National Coalition, at a press conference in Turkey on April 22.

The former Hezbollah secretary said that at least 138 militiamen had died in Syria and scores had been wounded.

Lebanese Sunni Muslim clerics called on April 23 for a holy war to defend co-religionists in Syria from Hezbollah, amid concern that Lebanon is being sucked into its neighbors’ increasingly sectarian conflict. Lebanon’s President Michel Suleiman rejected the calls. Hezbollah says it has a “national and moral” duty to defend border communities left vulnerable by the Lebanese army’s failure to help.

“Hezbollah fighters have crossed the border and started to kill our people to support the murderer Bashar al-Assad,” Sabra said at a televised press conference. “Imposters claiming to be Hezbollah resistance fighters are occupying Syrian villages, murdering civilians, preventing them from peacefully expressing their views.”

The group is considered a terrorist organization by the U.S., U.K. and Israel.

Syria’s conflict is rapidly deteriorating and is threatening the stability of its neighbors, particularly Lebanon, Susan Rice, the U.S. ambassador to the United Nations, told the Security Council yesterday.

“Hezbollah not only continues to undermine Lebanon from within by violating the government’s policy of disassociation, but actively enables Assad to wage war on the Syrian people by providing money, weapons, and expertise to the regime in close coordination with Iran,” she said.