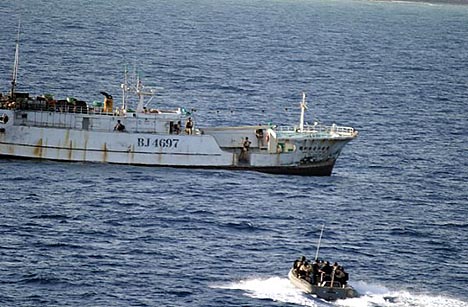 Somalia has long complained about illegal fishing off its shores but its coastline, the longest in Africa, is infested with pirates and has been left defenseless against foreign fishing fleets after two decades of civil war.

Puntland was the epicenter of the Somali piracy boom but the use of armed guards on ships and a concerted crackdown by international navies has seen the number of successful pirate attacks fall, with no successful hijackings since last June, according to the United Nations.

The Puntland Maritime Police Force (PMPF), which was trained at inception by an obscure South African private security group Saracen International, had been tasked with fighting piracy but its remit extends to combating illegal fishing and other illicit activities around Puntland’s coast.

Puntland government said 12 armed Somalia militia, recruited by the Iranians, also were taken into custody when the PMPF boarded the five ships in the Gulf of Aden on Tuesday.

“The apprehended Iranian crew, their boats and the armed militia will be brought to justice,” a statement by the Puntland government issued on Wednesday said.

PMPF’s other notable action against foreign ships took place in November, when the maritime force impounded MV Daesan, a North Korean ship ferrying cement to the Somali capital Mogadishu, accusing it of ditching its cargo off Somalia’s coast.