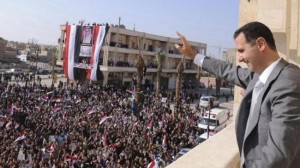 “Discussions are going on. We are in the process of putting the final touches on the subject of financial aid in a clear way,” he told Reuters in an interview, without specifying how much money Iran and Russia would provide.

He said Tehran had already given Syria a $1 billion credit line, more than half of which had been used, and that Russia was now printing Syrian banknotes, formerly supplied by Germany and Austria until the European Union imposed sanctions on Syria.

Syria had reserves of $17 billion when the uprising against Assad began just over two years ago. It now had “much more” left than the “incorrect” $4 billion figure which some bankers have quoted, Mayaleh said. He would not give a specific figure.

“If we compare the prices of commodities in Syria to those in neighboring countries, you find they are cheaper in Syria despite the fact that other countries do not have war being waged on them by countries from around the world,” he said.

“This means that reserves are still enough for Syria to stand fast against this conspiracy.”

Mayaleh said the war had caused economic losses of “over 25 billion euros” as well as halting growth, which he said had been running at 6-7 percent a year before the fighting began.

Mayaleh criticized the EU for deciding last week to modify sanctions on Syria to allow oil purchases from rebel forces in control of some eastern oil-producing areas.

“I don’t understand how the European Union can give these terrorist armed groups the right to export oil from Syria to Europe,” he said. “Under what law?…This is money laundering, this is stolen money and these are stolen goods.”

“They (Europeans) are nurturing these militant extremists,” he said. “When they finish their role in Syria … they will go to Europe…The Europeans are trying to bring up a monster who will turn against Europe and its citizens.”

The Syrian conflict has devastated the economy. Electricity is sporadic and Damascus residents have to queue for long hours for bread or petrol, which often run out. Prices of many basic foods and goods rose between 50 and 80 percent last year.

Mayaleh spoke of how the authorities were coping with the economic challenges posed by a war now entering its third year.

“(The opposition) spread rumors that salaries would not be paid for employees and that the state has gone bankrupt,” he said. “Two years have passed in this crisis … and the salaries have always been paid…a month in advance.”

Syria had tackled rumors of forged banknotes in circulation by telling citizens they could exchange any suspect currency at face value in banks for Russian-printed official notes, he said.

Nevertheless, the Syrian pound has slumped to 115 to the dollar in exchange houses from 46 before the uprising.

Mayaleh acknowledged that the pound was weak and that inflation was running at 50 percent a year, but said many other countries in the region, including Lebanon, Iraq and Kuwait, had suffered worse devaluations in times of conflict.

He did not answer a question on whether the government had a specific target for the Syrian pound’s value.

Like other government officials here, Mayaleh questioned why the West was “fostering and protecting” Syrian rebels.

“Aren’t the Europeans afraid of these groups turning on their countries and turning them into a hell, as happened in America?” he said of al Qaeda’s September 11, 2001 attacks.

Downstairs in the central bank building, scaffolding covered walls of an internal courtyard where windows had been blown out by the car bomb. Blinds on the front windows hung twisted. Outside, the blast had shriveled a palm tree to a black husk.

A crane lifted concrete blocks spray-painted with the Syrian flag into position to protect the building from future bombings.