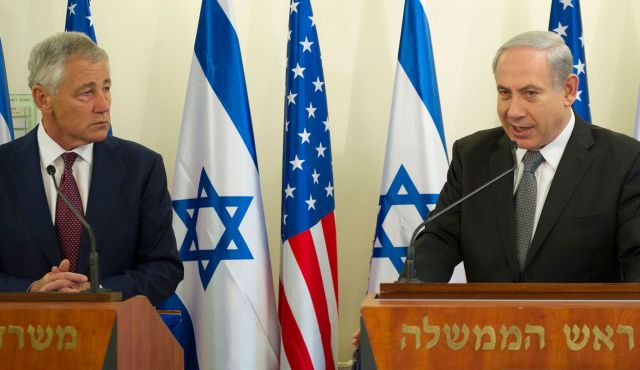 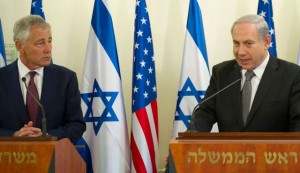 JERUSALEM (AP) — On Chuck Hagel’s inaugural visit to Israel as U.S. defense secretary, Syria surpassed Iran as the security threat of greatest urgency to the U.S.’ closest Mideast ally. That quite unexpectedly gave the new Pentagon chief a temporary respite from the delicate duty of tempering Israeli warnings about attacking Iran to stop it from building a nuclear bomb.

Israeli leaders see Iran’s nuclear ambitions as a threat to their country’s very existence, given Tehran’s vow to wipe it off the map. But Syria suddenly has emerged so prominently that it overshadowed Iran during Hagel’s three days in Israel.

That explains, in part, why Hagel repeatedly stressed in public Israel’s right to defend itself and to decide on its own, if necessary, whether and when to attack Iran. He gave less emphasis than usual by American officials to Washington’s wish that diplomacy and sanctions be given more time to persuade Iran to change course.

Notably, Israel’s new defense minister, Moshe Yaalon, said at a joint news conference with Hagel on Monday that he, too, thinks non-military means ought to be pursued further.

“By one way or another, the military nuclear project of Iran should be stopped,” Yaalon said. “Having said that, we believe that the military option, which is well discussed, should be the last resort anyhow.” He added, “There are other tools to be used and to be exhausted, whether it is diplomacy, economic sanctions, or even more support of the opposition in Iran.”

Hagel seemed to sense slightly less urgency in the Israeli concern about Iran, although he by no means dismissed the problem. One year ago, Hagel’s predecessor, Leon Panetta, was letting it be known that he feared Israel could attack Iran in a matter of weeks. Washington worries that such a strike could ignite a wider war in which it would be difficult for the U.S. to avoid getting involved.

That was before the Syrian civil war had reached the point of widespread concern that its illicit stockpiles of chemical weapons could pose a threat to Israel and other neighbors.

Jordan, too, is worried about transfers of Syrian chemical weapons. Hagel stopped briefly in Jordan Tuesday.

“The United States and Jordan share mutual concerns about the ongoing crisis in Syria and continue to consult closely on a number of issues including chemical weapons and the demands posed by the influx of Syrian refugees fleeing the violence,” Pentagon press secretary George Little said after Hagel’s meeting in Amman.

Little said the Pentagon has provided more than $70 million to Jordan this year to help secure its border and prevent the transfer of chemical weapons from Syria.

Hagel ended his day in Riyadh, Saudi Arabia, where he met with Crown Prince Salman bin Abdulaziz al-Saud, who also serves as the Saudi defense minister. Little said they discussed a proposed sale of advanced U.S. missiles for Saudi F-15 fighters as well as mutual concerns about Iran’s nuclear program and the violence in Syria.

The Israelis see immediate dangers in the Syrian civil war, not only in the threat along Israel’s northeastern border but also in the grim possibility that Syrian chemical weapons could fall into the hands of extremists. Israel says each of those possibilities is a “red line” beyond which it would have to act.

The concern is that if President Bashar Assad is overthrown, any of the Islamic extremist groups trying to oust him could turn his extensive arsenal against Israel.

A senior Israeli military intelligence official said Tuesday that Assad has repeatedly used chemical weapons against insurgent groups. It was the first such public claim by Israel and appeared to increase pressure on Washington and other Western countries to intervene in Syria.

President Barack Obama has warned that the use of chemical weapons by Assad would be a “game changer.” Little, the Pentagon press secretary, said Tuesday the U.S. government is still assessing reports of Syrian chemical weapons use, adding that such acts would be “entirely unacceptable.” He did not elaborate on possible U.S. actions.

The White House said Tuesday the U.S. hasn’t yet come to the conclusion that Assad has used chemical weapons even though close U.S. allies say he has.

In his assessment, Brig. Gen. Itai Brun, the head of research and analysis in Israeli military intelligence, told a security conference in Tel Aviv that Assad has used chemical weapons multiple times, including near Damascus, the capital, last month.

During Hagel’s visit, Israeli leaders still emphasized the dangers of a nuclear-armed Iran – as did Hagel. But to a degree not foreseen when Hagel arrived in Israel over the weekend, the threat posed by Syria’s chemical weapons overshadowed Iran.

Hagel wrapped up his visit Tuesday by meeting with Prime Minister Benjamin Netanyahu, who greeted him with a brief but pointed caution about resolving the Iran problem. He complained of Iran arming terrorist groups with sophisticated weapons, and its “attempt to arm itself with nuclear weapons.”

“This is a challenge that Israel cannot accept, and as you and President Obama have repeatedly said, Israel must be able to defend itself, by itself, against any threat,” Netanyahu said.