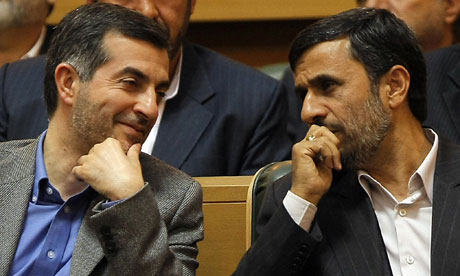 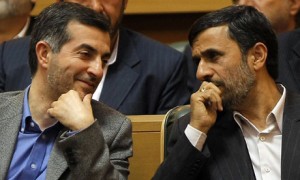 Iranian president’s chief of staff, Esfandiar Rahim Mashaei, would be a divisive figure if he stood in upcoming elections

With a growing list of hopefuls to replace Iranian president Mahmoud Ahmadinejad, the campaign’s most intriguing candidate may be a man who has not even announced whether he will run in the Islamic republic’s 14 June election.

Powerful and mysterious, Esfandiar Rahim Mashaei is, by most accounts, Ahmadinejad’s most trusted adviser – but he is also divisive, reviled and distrusted by traditional conservatives, and was once deemed unfit for office by supreme leader Ayatollah Ali Khamenei.

Questions remain over whether or not Mashaei could be cleared to run by the conservative bodies that have the power to vet candidates. If he does, many observers say his candidacy would represent a fresh challenge to the ruling clergy, a trend that began during Ahmadinejad’s current term.

“The rules of the game have been known and largely followed for three decades, and the cutthroat nature of Iranian politics is now being shaped by the Ahmadinejad camp repeatedly pushing the boundaries of what’s acceptable by the Islamic republic’s own standards,” said Reza Marashi, research director at the National Iranian American Council in Washington.

Mashaei served briefly as Iran’s vice-president in 2009, when Ahmadinejad, showing defiance in response to Khamenei’s decree, appointed Mashaei as his chief of staff. He now represents Iran as head of the Non-Aligned Movement, a group of about 120 countries whose presidency rotates among its members.

Regarded as a pragmatist, Mashaei has cast himself as a nationalist and moderate open to expanding co-operation with Iran’slongtime foes. In a 2008 speech that infuriated conservatives, he declared that “no nation in the world is our enemy”, and he praised the United States as “one of the great nations of the world”. For the ideologically committed members of the Islamic republic’s political establishment, such statements are considered so radical as to pose a risk to the theocracy that has governed Iran since the revolution of 1979. Opponents have taken to referring to Mashaei and others among Ahmadinejad’s advisers as a “deviant current”, and some have accused the men of sorcery and other illicit activities. But Mashaei has gained popularity among Iranian expatriates who see him as presenting Iran as open for business.

As a two-term president, Ahmadinejad is barred by law from seeking re-election. He has clashed sharplyover the past two years with the Khamenei camp, and has made no secret of his desire to see an ally elected as his successor. If his candidacy is approved, Mashaei could attract support from Ahmadinejad’s base in the working class, many of whom are veterans of the 1980-1988 Iran-Iraq war. He could also win support among Iranian nationalists who believe that identity trumps their religious one , a potentially large bloc of voters.

Other analysts believe his popularity is overblown. “I do not think Mashaei has enough support to win,” Farideh Farhi, an Iran analyst on the political science faculty at the University of Hawaii at Manoa, said. “He is not as well-known as everyone thinks outside of Tehran, and his Iran-centred turns are not seen as genuine by urban middle classes.”

A final list of candidates is not expected to be announced until mid-May, a month before the election.

Some analysts say Ahmadinejad and Mashaei have used unpredictability as an effective tool in maintaining power.

During Ahmadinejad’s presidency,which began in 2005, there have been few aspects of domestic and foreign policy that have not been affected by Mashaei. Among his key positions was his tenure as head of Iran’s cultural heritage and tourism organisation. In that role he made multiple trips abroad, solidifying relationships with leaders in a number of key countries where Tehran previously had little contact.

As head of an organisation called the High Council of Iranian Affairs Abroad, Mashaei invited more than 1,000 Iranian professionals living in other countries to return for a 2010 conference in Tehran to discuss ways to expand ties between the Islamic republic and its international diaspora and their money.

Although the event was controversial and expensive, it helped to solidify the image of Mashaei as a moderate. A kiosk at Tehran’s international airport recently opened touting the council’s successes, welcoming foreign tourists and Iranians returning home, with video messages from Mashaei and Ahmadinejad.

The relationship between Ahmadinejad and Mashaei is thought to go back to the 1980s, when both held posts in Iran’s north-west and rose inside the country’s security and intelligence forces. Those ties remain strong, and many of their political opponents worry about what sort of information the administration has gathered from intelligence organisations to use against rivals, which it has done in the past.

Neither man was particularly prominent in the Islamic republic, building up their revolutionary credentials without the help of powerful relatives. That fact probably adds to the perception of Mashaei and Ahmadinejad as outsiders in a system steeped in interwoven familial ties and gives them some credibility among Iranians who can identify with them.

The two are related by marriage. Mashaei’s daughter is married to Ahmadinejad’s eldest son.

Both men have used the image of themselves as everyday people to great effect, cultivating personas as nationalists open to expanding cooperation with Iran’s longtime foes.

Mashaei has been more visible in recent months, accompanying Ahmadinejad in most of his public appearances and showing an ability to attract large crowds of supporters.”Sidelining the Ahmadinejad team after the election won’t come without great cost, because this is now about political survival and the future of the Islamic republic,” Marashi said.