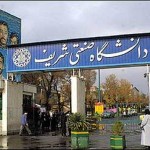 In a letter to Iran’s minister of Science, Research, and Technology, a group of cultural activists of Sharif University of technology have called for the closure or merger of the Management department. They have criticized the performance of the officials in the department, adding that they not only try to downplay economic policies of the 9th and 10th governments and the Islamic system, but also question the system’s major policies against global arrogance, Mehr reported.

According to Mehr, criticizing President Ahmadinejad’s recent statements, Alireza Zakani said that a person, whose relatives are steeped in financial and economical corruption, cannot claim to be fighting against economic corruption.

During a meeting with people in Khuzestan province on April 22 Iranian president Mahmoud Ahmadinejad threatened his critics with unveiling their corruption, saying that if he reveals some dossiers, some people will lose their position in public opinion.

In order to strengthen the borders control before the presidential elections, residents of border areas will work as assistants of border guards after the necessary training, Deputy Commander of Iran’s Border Operation Troops Hamid Sharafi said to Mehr agency.

Senior Member of Executives of Construction Party Hossein Marashi has said that Akbar Hashemi Rafsanjani and Mohammad Khatami, former Iranian presidents, are both trying to convince the other to be nominated for the upcoming Presidential election.