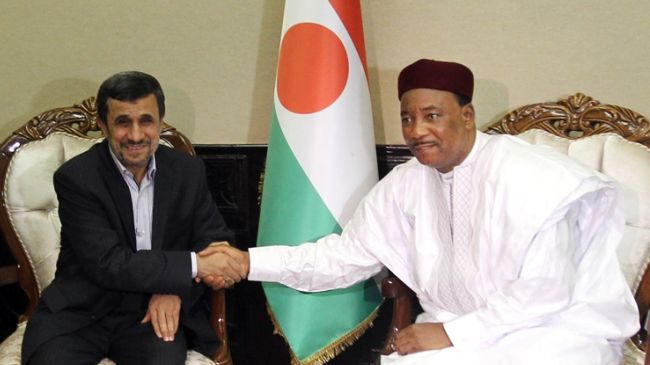 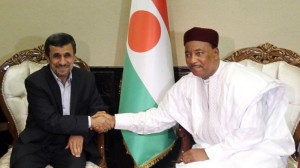 (Reuters) – Before Iranian President Mahmoud Ahmadinejad started a visit to Niger last week, there was talk that the poor West African state might add Iran to its list of buyers for the uranium mined in its remote desert north.

Such a deal would have alarmed world powers seeking to have Iran curb its shadowy nuclear program. But the outcome of Ahmadinejad’s trip was far less spectacular: an agreement on visas for diplomats and another on health cooperation.

Ahmadinejad’s final African tour before he steps down this year illustrated how Iran’s campaign to court the fast-growing continent has yielded remarkably little in the way of trade and votes at the United Nations against sanctions targeting its disputed nuclear activity over the past seven years.

“There is a general sense that Iran’s influence in Africa is on the wane,” said Manoah Esipisu, a Johannesburg-based Africa analyst. “Iran means trouble with Washington and its allies, and there is little appetite for that.”

With an economic growth rate forecast above 5 percent this year despite a global slowdown, Africa is now attracting investment from around the world, meaning the continent can afford to be choosier about its friends.

South Africa, sub-Saharan Africa’s largest economy, had relied on Iran for a quarter of its oil imports but gave in to Western moves last year to embargo Iranian oil exports, turning elsewhere to secure its crude.

Kenya, an important Western ally in the fight against militant Islam in East Africa, also backtracked within days on a deal to import 4 million tons of Iranian oil last year after its allies expressed disapproval.

“I told them the United States is an important export market … We don’t want a situation that will damage our economy,” said Ebrahim, who returned from Tehran last week.

“While we may appreciate and sympathize with them, there are certain realities that we need to take into consideration.”

Many developing states in principle back Iran’s insistence on the right to enrich uranium for what it says will be civilian nuclear energy only. But they also feel Iran should heed U.N. demands for transparency in its nuclear work to help defuse fears that it is trying to develop the means to make atom bombs.

TRADE DOWN, NO VOTES AT UNITED NATIONS

Last week’s visit to Benin, Niger and Ghana was Ahmadinejad’s fifth to the continent since he took office in 2005. Before the trip, he described relations with Africa as “of paramount importance to Tehran”.

But Tehran’s lobbying for votes at the U.N. Security Council has fallen on deaf ears. African nations have voted in favor of all four sanctions resolutions passed between 2006 and 2010 as a result of Iran’s nuclear program.

IMF data also suggests that Iran’s trade with Africa – a fraction of other emerging powers’ – has been hurt by sanctions. Its exports to sub-Saharan Africa peaked at $3.9 billion in 2011 only to slump last year to $1.8 billion.

Then the seizure of a secret Iranian arms shipment in Nigeria in 2010 en route for Gambia prompted Dakar to break off relations with Tehran as it feared the arms would have found their way across the border into the hands of separatist rebels.

The link between Iran and Lebanese militant group Hezbollah, which was ties in West Africa, causes particular concern.

“It’s important these countries are aware of the connections Iran has,” said one Western diplomat, noting Tehran was using its chairmanship of the Non-Aligned Movement to court African nations. “You can track a lot of things going on back to Iran … which means we need to be alert to what is going on.”

Iranian warships visited Sudan last year after Khartoum accused Israel of bombing a weapons factory there. Israel has not commented on that accusation but has accused Sudan of smuggling weapons to Iranian-allied Palestinian group Hamas.

In Niamey, the Nigerien capital, Ahmadinejad called on Muslim states to resist Western efforts to divide them.

“The enemy doesn’t want to see nations, especially Muslim ones, have good ties. They are always plotting … but there is no doubt that the will of the people will triumph,” he said.

But, with France a significant donor and security ally for Niger, Nigerien Foreign Minister Mohamed Bazoum was quick to stress that any exchange with Iran would have to meet international laws.

Jack Rosen, president of the American Jewish Congress and an adviser to several African leaders, said he was previously alarmed that Iranian activities on the continent were not being taken seriously enough but now feels the tide has turned.

“Iran and Ahmadinejad have become more pariah-like than they were a few years ago and African leaders understand where their long-term bread is buttered,” he said.