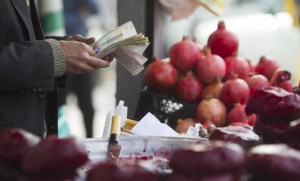 The press commentaries also suggest disputes within Iran’s ruling system over how to cope with an economy battered by international sanctions imposed because of Tehran’s controversial nuclear program.

Monday’s reports include the influential conservative daily Kayhan, which often supports the policies of the ruling clerics.

Prices of staples such as cooking oil, chicken and red meat have jumped up to 60 percent in recent days after authorities increased the special exchange rate for importers. Businesses now pay 24,500 rials for $1, nearly double from the 12,260 rials before.

Iranians will vote June 14 to elect President Mahmoud Ahmadinejad’s successor. There are concerns about possible unrest over Iran’s sinking economy.