Iran slams killing innocent in US and elsewhere: Khatami 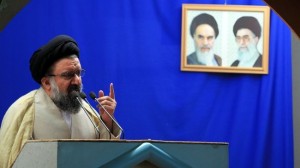 A senior Iranian cleric says the Islamic Republic condemns the death of innocent people equally in the US city of Boston and anywhere else in the world.

“The [Iranian] establishment’s position on the bomb explosions in Boston and Texas is that we condemn the killing of innocent people all over the world, be it in the US, Syria, Iraq, Pakistan and Afghanistan…,” Tehran’s Friday Prayers Leader Ayatollah Seyyed Ahmad Khatami said on Friday.

“Today we see in the US and Europe that the killing of women and children deeply saddens some people, but the same people supply weapons to Syria so that their agents brutally kill people. This is a paradox and dishonesty,” he told worshipers.

Ayatollah Khatami noted that such dishonesty proves that the US and Europe use the so-called war on terrorism and human rights as instruments to serve their own interest.

On Monday, two bomb blasts in the northeastern US city of Boston near the finish line of the city’s annual marathon race killed three people and injured over 130 others, prompting major cities across the nation to go on high security alert.

City authorities and medical personnel reported that the casualties included children, with one of those killed identified as an 8-year-old boy. At least 10 other children were also reported among the injured.

Investigators said that the bombs consisted of explosives placed in 1.6-gallon (6-liter) pressure cookers, one filled with shards of metal and ball bearings, the other with nails.