Iran will nip any threat in bud: Ground Forces commander 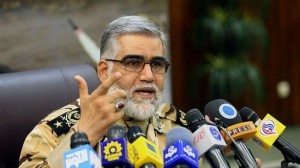 Commander of the Iranian Army’s Ground Forces Brigadier General Ahmad-Reza Pourdastan says any threat against the Islamic Republic will be “nipped in the bud.”

The Iranian commander made the remarks on Thursday at the end of a military parade which was held next to the mausoleum of the late founder of the Islamic Republic Imam Khomeini in the south of the Iranian capital, Tehran.

Units of the Iranian Army staged the parade on the occasion of the National Army Day on April 18 to display the country’s defensive and military capabilities. Senior Iranian officials and top military commanders attended the ceremony.

The parade conveys the message of peace and friendship to Iran’s neighboring countries, Pourdastan said.

The Iranian commander referred to Iran’s advances in the field of defense, saying that based on the types of threats the country faces, its defense industries and research centers have produced and made available these achievements to Iran’s armed forces.

Iran unveiled an indigenous drone, named Hazem 3, as well as Ya Zahra 3 and Mersad 2 missile systems and Sayyad 40 mobile electronic interception system during the parade.