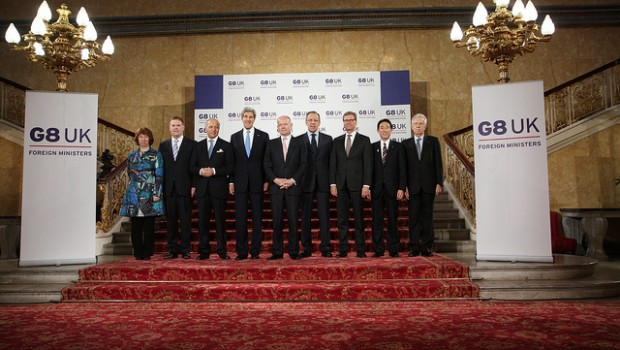 Beware of G8 statements on Iran 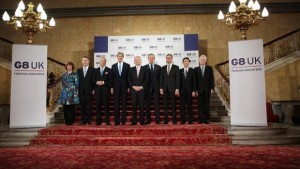 The statement issued by G8 Foreign Ministers at the end of their meeting in London last week contains four paragraphs on Iran. They appear in a section devoted to Non-Proliferation and Disarmament, ahead of four paragraphs on North Korea (DPRK).

The Iran section opens portentously with a ministerial expression of “deep concern”. The word “concern” appears twice more in the section, each time ascribed to “the international community”.

I want to explore whether the drafters of this statement were justified in giving such emphasis to “concern”, and in assuming that all but a handful of the 192 members of the UN (the international community) still feel concern regarding Iran’s nuclear activities.

I say “still” because ten years ago, when the Director General of the International Atomic Energy Agency (IAEA) first reported that Iran had failed to report possession of small quantities of nuclear material and their use in unsafeguarded nuclear research, the membership of the IAEA (over 140 states) was pretty much united in concern.

But much has happened since then. Iran has corrected the IAEA failures uncovered in 2003. The IAEA has reported that all the nuclear material that Iran is known to possess is in non-military use. Unlike the DPRK, accused by the US of having a secret uranium enrichment program two months after this accusation was first leveled at Iran (August 2002), Iran has not withdrawn from the Nuclear Non-proliferation Treaty (NPT), expelled IAEA inspectors, or tested nuclear devices.

Furthermore, the world’s leading intelligence agencies have come to the view that in 2003, whether from political embarrassment that year or simple prudence, Iran abandoned systematic research into nuclear weapons production, and may no longer intend to acquire nuclear weapons — a view endorsed at a political level:

– “We do not have grounds to suspect that Iran has aspirations to possess nuclear weapons” (Russian President, Vladimir Putin, 2 December 2010);

– “[Israel and the US] both know that Khamenei has not given the order to build a nuclear bomb” (Israeli Defence Minister, Ehud Barak, 6 August 2012).

Given all this, is it likely that “the international community” as a whole still feels concern over Iran’s nuclear activities? It would be surprising if 69 representatives of the 100-plus non-aligned segment of the international community do so. Their presidents or ministers adopted a declaration last August which contains no such expression. Instead, it contains several implicit attacks on some G8 members’ Iran policy. Inter alia, they say:

– “opposed…the actions by a certain group of States to unilaterally reinterpret, redefine, redraft or apply selectively the provisions of [legally-binding] instruments to conform with their own views and interests and affect the rights of [State Parties]” (24.6);- “confirmed that each country’s choices and decisions in the field of peaceful uses of nuclear energy should be respected without jeopardizing its…fuel-cycle policies” (188);

– “reaffirmed… that any attack or threat of attack against peaceful nuclear facilities … poses a great danger to human beings and the environment, and constitutes a grave violation of international law” (192).

So it seems the G8 cannot reasonably claim universal support for their concerns regarding Iran. Are they themselves right, though, to be so deeply concerned “regarding Iran’s continuing nuclear and ballistic missile activities in violation of numerous UN Security Council resolutions”?

Of course in principle the violation of UNSC resolutions must always be cause for concern. But in this instance there are grounds for asking whether continuing to take so serious a view of Iran’s defiance is justified.

The first three Iran resolutions were adopted when it was still rational to fear that Iran was resolved on acquiring nuclear weapons. The resolutions demanded of Iran the suspension of all fuel cycle activities for a purpose: to hinder such acquisition. Is that demand still reasonable now that even an Israeli minister admits that Iran is not “building bombs”?

Those resolutions also demanded that Iran shed more light on its nuclear past, allow the IAEA to verify that Iran has no undeclared nuclear material and improve the timeliness with which the IAEA may detect any future diversion of nuclear material. These demands remain reasonable. But, as the G8 know, Iran is not unready to accede to them. It was doing so from 2003 until 2006; it stopped doing so only when the UNSC was brought into play to make suspension a mandatory requirement.

This suggests that the G8 have it in their power to win respect for these demands. They can do so by recognizing that the situation no longer calls for mandatory suspension and sanctions and trading repeal of these measures for the confidence-building measures they want from Iran.

Until that recognition dawns, caveat lector! Any G8 statement that treats the Iranian nuclear problem as comparable in gravity to North Korea’s numerous nuclear shenanigans is to be read with a pinch of salt.