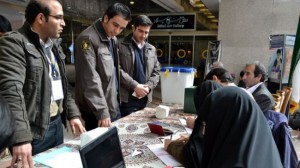 Iran is less than two months away from its next presidential election on June 14, 2013. As President Mahmoud Ahmadinejad is preparing to bow out, Iranians and international observers are interested in equal measure to know about political developments in Iran and see which political faction or individual would sweep the vote.

Unlike previous general elections in which the two mainstream political factions – Principlists (right-leaning conservatives) and reformists (leftist radicals), the upcoming election would see at least three political tendencies run for the presidency. They are classified as follows: Principlists (coalitions, independent candidates and Perseverance Front), Reformists (moderate and radical figures) and government affiliates.

The Principlists bidding for the presidency are born out of the right-leaning conservatives who are no longer as integrated as they were in the previous decades, particularly when reform-minded Mohammad Khatami was in power. The political and social developments of recent years have divided them into several other groups. They are all fully obedient to Leader of the Islamic Revolution Ayatollah Ali Khamenei and faithful to the values of the 1979 Islamic Revolution, but they have differences of opinion regarding some political orientations. These differences have prevented them from closing ranks in the run-up to the presidential election. The Principlists are divided into the following subcategories:

This alliance, known as Coalition of Three, is the mainstream conservative group which, according to opinion polls, is more popular than others.

Haddad Adel, a former speaker of parliament, is a cultural figure and a humble promoter of poetry, literature and philosophy. A professor of philosophy at University of Tehran, Haddad Adel contributed to textbooks in the 1980s.

His critics say Haddad Adel would not manage to run a country like Iran. Despite his reputation, he failed to win the position of Majlis Speaker.

Velayati, a medical doctor, served as foreign minister for 16 years until 1997. Even after the end of his official term in office, Velayati has not been marginalized in decision-makings. He has since served as senior advisor to Ayatollah Khamenei as well as representing the Leader in the Supreme Council of Cultural Revolution and the Expediency Council.

In the early 1980s when Ayatollah Khamenei was serving as Iran’s president, Velayati was his favorite for prime minister. But due to opposition from the dominant political faction in Majlis, Velayati could not win the top executive post.

Velayati holds friendly ties with other political leanings and is specifically close to influential cleric Akbar Hashemi Rafsanjani whom he served as foreign minister for eight years.

In 2005, Velayati had registered to run for president, but he ruled himself out of the race when Rafsanjani also made a comeback bid.

Qalibaf, who is reportedly popular in Tehran and his hometown Mashhad in northeastern Iran, was a military commander during eight years of Iraqi imposed war against Iran (1980-1988). Due to his high qualifications, he was named commander of the Islamic Revolution Guards Corps (IRGC) Air Force after the end of the war. He went on to become state police chief.

As police chief, Qalibaf left a positive impression on Iranians to the extent that he decided to run for the president in 2005. However, he was defeated in the first round of the vote which saw Mahmoud Ahmadinejad and Rafsanjani head into a runoff.

After that, Tehran City Council picked him as mayor of Tehran. Over the past eight years, Qalibaf has revived his popularity in Tehran thanks to his effective urban planning.

This coalition is to choose one of its members with the highest approval rating as the candidate to succeed Ahmadinejad. Unconfirmed reports say Qalibaf is the shoo-in to represent this coalition.

Five traditionalist conservatives have formed another coalition. Members of this coalition are as follows:

Manouchehr Mottaki, a former Foreign Minister and also a former Ambassador to Turkey and Japan.

Mostafa Pour-Mohammadi, head of the General Inspection Office of Iran, a former Interior Minister who has lengthy experience in intelligence and security affairs.

Mohammad Reza Bahonar, known as the most influential MP who has clout within political and economic circles, was instrumental in the approval of Ahmadinejad’s ministerial nominees in Majlis. However, he tries to show his distance from Ahmadinejad these days.

Yahya Ale Eshaq, head of Tehran Chamber of Commerce and a former minister of commerce, is trying to win the vote of Iranian businessman although a corporatist model does not have much credibility in Iran.

Mohammad Hassan Aboutorabifard, vice speaker of Majlis, who is running for president because he says he feels responsible.

The vast number of presidential hopefuls, who all claim to be running due to the burden of responsibility, has caused Iranians to resort to sarcasm to advise people to feel less responsible and allow competent candidates to join the race.

Some analysts maintain that the Coalition of Five has no chance of winning the presidency. The coalition is pursuing individual and factional objectives. On the one hand, this coalition can close ranks with the Coalition of Three if they enter a tight race with Reformists and government affiliates, while on the other hand, all five of them intend to express themselves in a bid to win a foothold in the next administration.

This front regroups political activists who were staunch supporters of Ahmadinejad up to 2010. The main members of this front are hardliner MPs Ruhollah Hosseinian, Mehdi Kouchakzadeh and Hamid Rasaei, former Interior Minister Sadeq Mahsouli and former Health Minister Kamran Baqeri-Lankarani.

Backed by influential cleric Ayatollah Mohammad-Taqi Mesbah-Yazdi, this front dissociated itself from Ahmadinejad due to his unflinching support for his close associate Esfandiyar Rahim Mashaei whom conservatives accuse of leading a “deviant current”. This current is suspected of sparing no efforts to win the presidency in order to continue with the policies of Ahmadinejad.

The Perseverance Front won 100 out of 290 seats in Parliament in March 2012 election, but it has so far failed to agree on a candidate.

This front has been taken to task by moderate Principlists due to its radical positions and connections with wealthy politicians like Mahsouli.

Jalili and Fattah have no inclination for the presidency and Elham has lost any chance of election win due to his return to the government. Lankarani, who is also the Front’s spokesman, is likely to be nominated.

However, opinion polls show that the Perseverance Front does not have enough popularity in Iran.

Some Principlists are running on an independent ticket, the most famous of whom is Mohsen Rezaei, a former head of the Islamic Revolution Guards Corps. Currently serving as secretary of the Expediency Council, Rezaei has previously run for president and lost. Other independent hopefuls are former Intelligence Minister Ali Fallahian and incumbent Education Minister Hamid Reza Haji Babaei who have no luck of winning the presidency.

The Reformists are divided into radical and moderate ones. The radical ones believe Mohammad Khatami, who served as president from 1997 to 2005, is the best choice to succeed Ahmadinejad. They believe that Khatami is capable of garnering enough votes and enforcing policies backed by Reformists. However, some analysts say Khatami is likely to be disqualified by the Guardian Council due to his position following the disputed 2009 election. It is unlikely that he will run for president as disqualification would hurt his social and political reputation.

Radical Reformists, who feel their chance of victory is slim, prefer to minimize their participation in the election.

For their part, moderate Reformists say they have yet to reach consensus on a nominee. They are choosing between former chief nuclear negotiator Hassan Rohani, former Reformist MP Mostafa Kavakebian and former vice-president Mohammad-Reza Aref.

Aref has said he would not run if Khatami decides to announce his bid.

Akbar Hashemi Rafsanjani is a figure whom both certain Reformists and Conservatives want to join the presidential race. He is the most well-known politician in Iran after the late founder of the Islamic Republic Ayatollah Ruhollah Khomeini and his successor Ayatollah Khamenei.

Currently chairing the Expediency Council, Rafsanjani is an outspoken critic of Ahmadinejad’s policies. His proponents believe that the 77-year-old veteran politician is the only one capable of leading the country out of the present circumstances. His critics say he is not physically capable for presidency and his return would mean political reactionism.

Rafsanjani’s behavior in the past has shown that he is completely unpredictable and he may decide to run for president in the last minute. Moreover, he is not afraid of defeat. He ran in 2005 and lost to Ahmadinejad. Rafsanjani conceded defeat at the time although some analysts believe that without his candidacy, Ahmadinejad would not have managed to polarize the election and win over slum dwellers and villagers to reach victory.

President Ahmadinejad is willing to stay in power, but the Constitution bars the president from seeking a third consecutive term. Therefore, he is following Russia’s Putin-Medvedev model and wants a successor close to him so that he can come back to power after a four-year break.

Ahmadinejad still believes he is highly popular in Iranian society while many believe that his honeymoon phase is over. The price hikes in the past years have been instrumental to that effect.

Ahmadinejad is grooming Rahim Mashaei for presidency. Many believe that Rahim Mashaei is behind many of the 9th and 10th administration’s decision. He wields a great deal of influence over Ahmadinejad who has his back in all political disputes.

Rahim Mashaei is accused by his opponents of being superstitious and having connection with fortune-tellers and seers. Over the past eight years, a strong economic network has taken shape around him. This network is referred to as the “deviant current.”.

Speculation is rife that the Guardian Council will not clear Rahim Mashaei to run for president. His supporters believe that Ahmadinejad will stop at nothing to see him qualified even at the price of seeking an intervention from Ayatollah Khamenei. In the lead up to the 2005 election, Ayatollah Khamenei intervened in favor of two Reformist candidates who had been disqualified by the Guardian Council.

But Ahmadinejad does not put all his eggs in one basket. He has other options on mind including his spokesman Elham, his Foreign Minister Ali Akbar Salehi and his Road and Urban Development Minister Ali Nikzad.

Reformists and pro-Ahmadinejad political activists are unlikely to win the presidential election in June. Both groups are chanting political slogans while Iranian people expect the next president to have international sanctions eased and resolve their economic woes. The Coalition of Three has focused more than others on these issues. Iranians want an administration that takes into account their political, cultural and economic concerns equally.