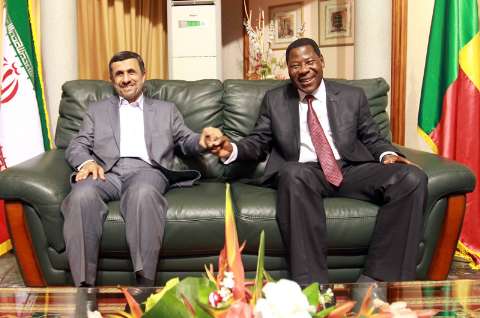 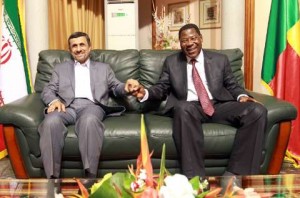 (Reuters) – Iranian President Mahmoud Ahmadinejad arrived on Monday in Niger, the world’s No. 4 uranium producer, where the French nuclear group Areva has seen its grip on the industry loosened by a government looking to diversify its partners.

Niger is the second of three stops on a trip aimed at deepening Iran’s ties with Africa, a continent Ahmadinejad has courted for business deals and diplomatic support as the Islamic Republic becomes increasingly isolated by international sanctions prompted by its disputed nuclear program.

Some Western analysts say Iran may be close to exhausting reserves of raw uranium crucial to its nuclear activity and might have to seek out foreign sources, although the U.N. sanctions would forbid such purchases.

Last week, Iran said it had started up two uranium mines and a milling plant, and that Western opposition would not slow its nuclear work.

Before leaving Benin, Ahmadinejad said these plants “will completely provide for Iran’s needs” and that it did not need to buy uranium in Africa, the Iranian Students’ News Agency (ISNA) reported.

Niger Foreign Minister Mohamed Bazoum said uranium was not on the official agenda but might still come up.

“Even if Iran wants our uranium, the sale would need to be governed by international regulations,” Bazoum said. “Even if the question comes up, it will require a consideration of international laws.”

Ahmadinejad was greeted at the airport by Niger President Mahamadou Issoufou and, without making a statement, was taken in a convoy to the rundown riverside capital, Niamey.

Issoufou said last month he wanted to renegotiate the terms of Niger’s nuclear business with Areva and was looking for other partner countries.

After Niger, Ahmadinejad travels to oil-producing Ghana. However, his influence at home is already waning as he prepares to step down in August after completing his second and final term.

There is broad frustration in Niger that one of the world’s least developed nations, much of it desert, has not benefited more from decades of mining by Areva, which is controlled by the French state.

This month, several thousand people protested on the streets of Niamey against Areva, burning French flags.

Talks are continuing between Niger and Areva, which has agreed to pay 35 million euros ($46 million) in compensation over delays to the planned Imouraren project.

France remains an important partner for Niger, providing some 50 million euros in budgetary support last year on top of various other aid projects.

A report this month by two U.S. think-tanks, the Carnegie Endowment and the Federation of American Scientists, said the scarcity and low quality of Iran’s uranium resources would compel it “to rely on external sources of natural and processed uranium”.

“Despite the Iranian leadership’s assertions to the contrary, Iran’s estimated uranium endowments are nowhere near sufficient to supply its planned nuclear program,” it added.

Iran denies Western accusations that it is stockpiling enriched uranium as potential nuclear weapons fuel, not for future civilian power stations as it maintains. ($1 = 0.7635 euros)