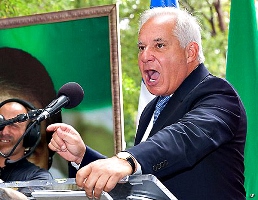 A former New Jersey senator and congressman has been hired to lobby for an Iranian opposition group once considered a terrorist front by the U.S. State Department.

The Hill reports that Robert Torricelli is representing the National Council of Resistance of Iran on behalf of his lobbying company Rosemont Associates.

Torricelli is consulting and providing strategy for the group, whose members include the Mujahedin-e Khalq (MEK) — blamed by the State Department for attacks that killed Americans in Iran in the 1970s.

The MEK has since renounced violence, according to its supporters, and former Secretary of State Hillary Clinton removed the MEK from the terrorist list last year.

The Hill reports that speaking fees paid by MEK supporters to politicians have attracted the attention of federal investigators in the past.

Among those who have been paid to speak include ex-Pennsylvania Gov. Ed Rendell and Gen. Hugh Shelton, former chairman of the Joint Chiefs of Staff.

Torricelli — nicknamed “The Torch’’ — served 14 years in the House of Representatives before being elected to the Senate for a single term, from 1997 to 2003.

In 2002, the Senate Ethics Committee ”severely admonished” Torricelli, saying he violated Senate rules by accepting and failing to disclose gifts — including a large-screen TV and earrings — from a former contributor.