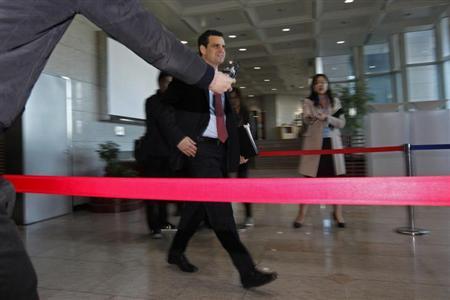 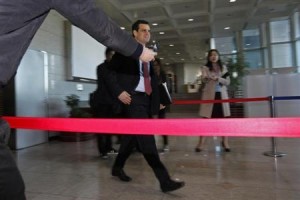 U.S. Under Secretary of the Treasury for Terrorism and Financial Intelligence David Cohen leaves after a meeting with South Korea’s nuclear envoy Lim Sung-Nam at the Foreign Ministry in Seoul March 20, 2013.

ANKARA, April 12 (Reuters) – An Iranian businessman named by the United States and the European Union for breaching sanctions against Iran said on Friday his blacklisting was giving him good publicity.

The U.S. Treasury Department slapped financial penalties on Babak Zanjani and a network of companies on Thursday which it accuses of attempting to evade international sanctions on Iran’s nuclear programme by moving billions of dollars on behalf of the Iranian government.

Zanjani, who denies any wrongdoing, was already a target of EU sanctions, which described him in December as “a key facilitator for Iranian oil deals” and accused his Malaysia-based First Islamic Bank of being used to channel Iranian oil-related payments.

“We didn’t have any problems in our business since the EU ban. Actually, business is much better compared to December,” Zanjani told Reuters by telephone from Dubai, where several of his companies are based.

“Sanctions have provided publicity for us,” he said.

U.S. and European sanctions on Iran’s oil industry aim to choke funding for its nuclear programme. The West fears Iran is seeking atomic weapons, while Tehran says the programme is for civilian purposes.

Under Thursday’s U.S. sanctions, Zanjani, First Islamic Bank and a network of companies are banned from any transactions with U.S. citizens and any assets they have under U.S. jurisdiction are frozen.

“The United States duplicated the European Union sanctions. They have no documents to prove their accusations,” said the businessman, whose group has up to 65 companies operating in cosmetics, food, oil and aviation.

“I am Iranian therefore inevitably I work with Iranian companies. But I do not help the Iranian government,” he said.

One of the Zanjani companies sanctioned by the U.S. is based in Turkey. An official for Kont Group and Kozmetik Ltd said Zanjani handed over his shares in the company to a Turkish individual in February and no longer has ties with the firm.