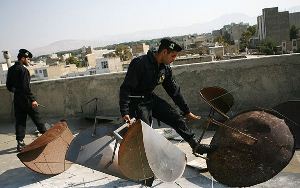 Parisa, an Iranian electronics engineer, has had her roof-top television satellite dishes seized by police four times over the past year – and each time she has reinstalled them.

The Persian-language programmes aired on those channels from overseas are part of her family’s life, especially London-based Manoto’s broadcasts of documentaries, detective series and singing and food shows modelled after American Idol and Come Dine with Me.

“I watch Manoto because the programmes are lively and informative and presenters are young and energetic,” says Parisa, 48.

Her defiant viewing is emblematic of what experts say is a counterproductive Iranian government policy of banning satellite channels and confiscating the equipment used to receive them. Local media report that about 60 per cent of Iranian families watch satellite programmes, the number growing as people try to escape a stream of negative political and economic news.

In doing so, they are tacitly rebuffing Iran’s intelligence ministry, which sees a western conspiracy in promotion of satellite channels. In a statement earlier this year, the ministry blacklisted several satellite channels, including Manoto, alleging they were affiliated to the BBC and were part of “the psychological war unit of British government’s spy organisation”.

The Islamic regime in Tehran could intensify the crackdown on satellite dishes in the coming months as Iran prepares for a presidential election on June 14, during which it hopes to project a democratic image of the country through a high turnout. Satellite channels usually discourage Iranians from voting by asserting directly or indirectly that the election results are rigged.

Since the 1990s, when satellite channels were first broadcast into Iran, the country’s Islamic rulers have tried to prevent the “cultural invasion” of outside entertainment and news. In recent years, they have targeted Manoto and the Persian services of BBC and Voice of America, jamming signals and seizing satellite dishes.

Yet during the just-ended two-week New Persian Year holidays, Iranians were largely tuned to either Manoto or the Dubai-based Gem TV, which is run by a little-known Iranian businessman and airs Turkish soap operas.

Manoto now has nearly 1.2m likes on Facebook, twice as many as the BBC’s Persian Service. One recently-aired popular show is Googoosh, Music Academy – a singing competition named after and judged by Googoosh, a legendary female singer.

Parisa’s husband, Behrang, an IT engineer, watches entertainment shows more than before, as he seeks light relief from the fall in his income as the rial has plunged in value over the past year.

The identities of Manoto’s sponsors remain confidential. But many Iranian analysts believe the channel is delicately and deliberately promoting Iran’s ousted monarchy, which has also been celebrated in Gem TV’s the Magnificent Century. Set during the 46-year reign of Sultan Soleiman in the 16th century, it tells the story of his imperial harem and his slave-girl-turned-queen, Hurrem.

At the same time, Turkish series – dubbed into Persian – are leading to a re-evaluation of Turkey’s culture by Iranian audiences who, like many Arab viewers of the same series, are fascinated by the reconciliation of Islam with social freedom.

A feeling of cultural proximity between both societies has made Turkish programmes more influential on Iranians than Colombian soap operas on Rupert Murdoch’s Farsi1, which was the most popular channel some years ago.

Media experts think interest in satellite channels will continue to grow in Iran, as they are seen as a welcome alternative to state-run radio and television that function as a propaganda machine to control the nation’s tastes and ways of thinking.

A study by the parliament’s research arm last December said the state monopoly in Iran’s broadcast media had caused it to become “lazy, backward and boring”.

“I believe Manoto is a very smart channel which has invested in the loopholes of Iran’s domestic media,” says Reza Rashidpour, a former prominent presenter of Iran’s national television.

Domestic media also blame the state-run broadcasters. “The weakness of national radio and television has led to attraction of people especially the youth toward satellite channels,” Alef, a conservative news website, said recently. “The result is the youth lifestyle and thoughts are being formed based on western values.”

Parisa and Behrang say they feel “insulted” when they watch Iran’s television. However, like many parents they regret that Turkey – which they say was far behind Iran three decades ago – is now admired by their two children mainly because of social freedom.

Meanwhile, they themselves feel nostalgic when they watch some old public dancing programmes and solo singing by women on Manoto under the monarchical rule of Shah Mohammad-Reza Pahlavi’s regime.

Nasser Fakouhi, a reform-minded sociology professor at Tehran University, agrees with Iran’s rulers that satellite channels are part of a “carefully-planned invasion” by western powers. But he argues this has been the result of the regime’s ideology of interfering in people’s daily lives down to small details. “No regime in the world has ever been able to control people’s tastes and leisure time.”