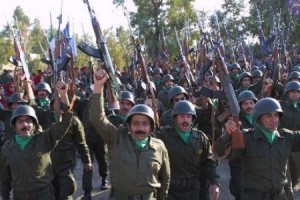 The Iranian opposition group MEK is opening an office in Washington after the State Department dropped it from its terrorist list last fall.

The National Council of Resistance of Iran, an umbrella group of five Iranian opposition groups, announced Tuesday that it is opening a DC office as part of “the Iranian resistance’s expanding efforts inside and outside Iran.” The Mujahedin-e-Khalq (MEK) is the largest organizational member in the council, according to Near East Policy Research, a pro-MEK group that distributed an invitation to the council’s open house reception on Thursday.

The State Department closed the council’s Washington office in 2002, calling it a front group for the MEK. Since then, the group has earned the good graces of U.S. conservatives by drawing international attention to Iran’s clandestine uranium enrichment facility in Natanz.

Secretary of State Hillary Clinton removed the MEK from its terrorist list last September after an intense lobbying campaign that included millions of dollars paid to prominent lawmakers and former government officials. The group has been accused of killing Iranian civilians and targeting U.S. business and diplomatic interests during the time of the Shah but has since renounced violence.

The council, which labels itself as Iran’s Parliament-in-exile, was founded in Tehran in 1981 and is based in Paris.  It says its aim is to replace Iran’s theocracy with a “democratic, secular and non-nuclear republic.”

“The opening of the office is consistent with the Iranian resistance’s expanding efforts inside and outside Iran, aimed at bringing democratic change to Iran and the timing could not be better with the failure of the nuclear talks and the upcoming Presidential elections in Iran,” the group said. “It [is] of course, more than just opening an office. It sends the strong political message to Tehran that the real Iranian opposition is back in business. And is just across from the White House.”

The council will hold an open house reception hosted by its U.S. representative, Soona Samsami, on Thursday.

Speakers include former Sen. Robert Torricelli (D-N.J.) and Rep. Patrick Kennedy (D-R.I.) and a host of former State Department officials of both parties, including U.S. Ambassador to the U.N. John Bolton as well as John Sano, the CIA’s former deputy director for Clandestine Services.