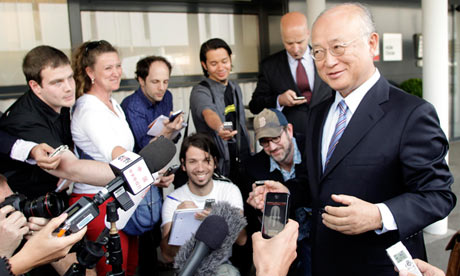 Iran may have continued weapons research after 2003, IAEA chief says 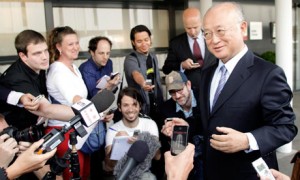 The head of the United Nations’ nuclear watchdog said Monday that his agency cannot rule out the possibility that Iran was actively seeking nuclear weapons technology, citing intelligence on suspicious research by Iranian scientists that occurred as recently as a few years ago.

Yukiya Amano, director general of the International Atomic Energy Agency, said it is crucial that Iran come clean on its nuclear past, granting full access to Iranian facilities and documents as well as key scientists believed involved in the work.

“Iran’s activities could be continuing up until now. . . . I have asked Iran to clarify,” Amano said during a conference on nuclear nonproliferation in Washington.

Amano was responding to questions about the IAEA’s repeated efforts to gain access to a military facility near Tehran where Iranian scientists are believed to have conducted secret research a decade ago on an explosive trigger used in detonating nuclear bombs. U.S. intelligence officials think that the military base, known as Parchin, was part of an extensive research program to gather know-how for nuclear weapons.

Western spy agencies think the work was suspended under orders of the country’s leadership in 2003. But IAEA reports have hinted about evidence of ongoing but apparently limited research that occurred as recently as 2009.

Amano said there is no hard evidence that the work continues today, but he said Iran’s lack of transparency creates doubts.

“We have credible information that Iran continued its activities beyond 2003,” Amano told an audience of nuclear and arms-control experts at the annual Carnegie International Nuclear Policy Conference.

Officially, “we do not know” whether the research remains active, he said.

The comments came on the heels of a diplomatic setback in efforts to ease international anxiety over Iran’s nuclear advances. Negotiators from Iran and six world powers made no perceptible progress during weekend talks in Kazakhstan intended to forge an agreement on limiting the size of Iran’s nuclear program.

Iran, which insists it is seeking only peaceful nuclear energy, has demanded broad relief from economic sanctions in return for any limits on its enriched-uranium stockpile.

On Sunday, Secretary of State John F. Kerry said time could be running out for diplomacy.

“This is not something where you can play to the clock,” Kerry said at a news conference during a visit to Turkey. “You can’t just delay and talk for the sake of talking. So we would repeat to Iran it is our desire to have a diplomatic solution, but this choice really lies in the hands of Iranians.”