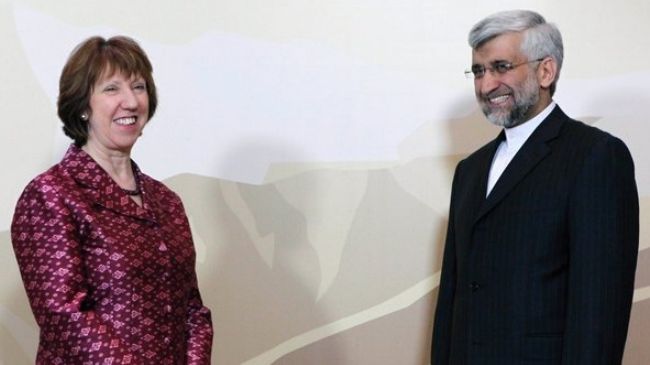 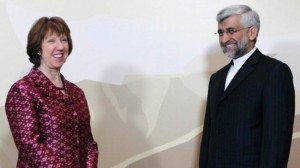 The EU’s foreign policy chief, Catherine Ashton, and Secretary of Iran’s Supreme National Security Council Saeed Jalili pose for photos at the beginning of a new round of comprehensive talks between Iran and the P5+1 group in Almaty, Kazakhstan.

Jalili and Ashton met on Saturday ahead of a second day of comprehensive talks between Iran and the P5+1 group of world powers.

They explored ways of advancing the talks and the two sides’ positions during the negotiations.

The top Iranian nuclear negotiator and the EU foreign policy chief, who represents the P5+1 group – Britain, China, France, Russia, the US and Germany – also exchanged views on proposals put forward by Iran for a breakthrough in the fresh round of talks, that are underway between the two sides in Almaty.

Iran and the P5+1 held two rounds of talks in Almaty on Friday and discussed a range of issues with the main focus on Iran’s nuclear energy program.

Speaking during a press conference after the first round of talks on Friday, Undersecretary of Iran’s Supreme National Security Council Ali Baqeri said the Islamic Republic has offered the group “clear proposals to launch a new round of cooperation” between the two sides.

Earlier on Thursday, Michael Mann, the spokesman for Ashton, told Press TV that, “Nobody is denying the right for Iran or any other country to have nuclear technology for medical purposes or for energy purposes.”

Tehran and the P5+1 have already held several rounds of talks, the previous rounds of which took place in Almaty on February 26-27.

Iran argues that as a signatory to the nuclear Non-Proliferation Treaty (NPT) and a member of the International Atomic Energy Agency (IAEA), it is entitled to develop and acquire nuclear technology for peaceful purposes.