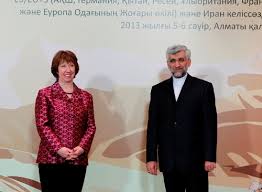 Iran news headlines on Saturday include EU’s Ashton calling for 5th round of Iran-P5+1 talks in Almaty; Iran releasing new 500 ton submarine within the next few months; Iran deputy speaker condemning 2011 attack on UK embassy; meeting of Saeed Jalili & Catherine Ashton in Almaty ahead of P5+1 talks and Iran investigation on deaths of two Iranian pilgrims in Jeddah.

Ashton asks for 5th round of Iranian nuclear talks in Almaty

European Union foreign policy chief Catherine Ashton has asked for the fifth round of P5+1 and Iran talks, an Iranian source told Trend from Almaty.

Iran and six major powers (Britain, China, France, Russia, and the US plus Germany) finished the fourth round of nuclear talks on Saturday afternoon.

He added that the final stages of the submarine’s design and construction are currently underway and that it will be unveiled by August 2013.

The deputy speaker of Iran’s parliament has condemned an attack in 2011 by Iranian protesters on the British embassy in Tehran, Iranian media say.

“No-one has the right to raid another country’s embassy, it is our duty to protect them,” Mohammadreza Bahonar, a presidential hopeful, said.

Jalili and Ashton met on Saturday ahead of a second day of comprehensive talks between Iran and the P5+1 group of world powers.

A senior Iranian lawmaker says a Foreign Ministry delegation will travel to Saudi Arabia’s capital of Riyadh to probe the deaths of two Iranian pilgrims in Jeddah.

Chairman of the Majlis Committee on National Security and Foreign Policy Alaeddin Boroujerdi said that the Saudi government is obliged to provide security for Iranian pilgrims since the time they enter the country and should be accountable in this regard.