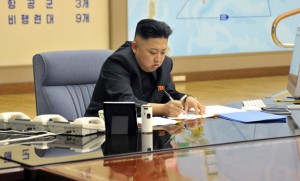 On the morning of April 2, 2013, we woke up to two news items about the development of nuclear weapons by totalitarian states. The first item (in The Wall Street Journal) announced that the Iranians are putting their nuclear activities on hold so as not to exacerbate the crisis with the West before the national elections in June. The second (from the various news agencies) stated that the North Koreans are restarting their nuclear reactors and uranium enrichment sites, for the sake of peace, of course. Is there any connection between these two events? I’m not sure there isn’t.

Just a reminder: The first and so far the only time that Iran took any serious steps back from its nuclear program for military purposes occurred in 2003, when the United States invaded Afghanistan and Iraq. The presence of American military might within mortar range of its borders convinced Iran not only to postpone, not only to slow down, but to go so far as to suspend the activities of its “weapons group” entirely. This was considered enough progress for the annual American National Intelligence Survey published a year later to put a damper on Israeli warnings by releasing tepid report claiming that the Iranians were generations away from having nuclear capabilities. This gave the ayatollahs’ regime the vital time-out it needed to restore past glory and come within arm’s length of military grade nuclear capabilities.

Now, as another nuclear front heats up, this one between North Korea and the United States, Tehran is facing a dilemma. Unlike Iran, North Korea is  isolated and cut off from the rest of the world, and it has been since the get-go. It’s impossible to impose sanctions on it. It doesn’t care about what the West thinks. It just sticks its tongue out at the United States, even if it sometimes gives the impression that this isn’t a nation at all, but rather, a comic interlude.

Nevertheless, it’s important to remember that this comic interlude is armed from head to toe and has nuclear capabilities. North Korean leader Kim Jong-un may look like a parody of some insane despot from Saturday Night Live, but the fact that he has his hand on the button in Pyongyang means that this isn’t funny anymore. North Korea manages to do whatever it wants, including the development of an ambitious nuclear program, including a declaration of war against its neighbor to the south. The fact that it avoids being punished for all that does not bode well for the American policy or for the international efforts to bring an end to the Iranian nuclear program by peaceful means.

The Iranian election is the most immediate reason why the Iranian religious and political leader Ayatollah Khameini ordered that progress on uranium enrichment be slowed down until after June. There are two ways to approach this recent directive: optimistically and pessimistically.

The pessimistic approach contends that this is just a tactical measure, and that there is no real intention to slow down the uranium enrichment process or, more generally, to change policy with regard to nuclear development. It is just another typical Iranian maneuver intended to buy more time. Khameini never had any intention of forgoing his nuclear program, but he decided that it would be better to wait until after the elections, when he has a president more to his liking. That will place him in a better position to take on the rest of the world.

The optimistic version of events paints a slightly different picture. It argues that the doomsayers who claimed that Khameini would try to use the nuclear crisis as leverage to ensure that the country elects an extremist president to his liking have made a serious mistake. What is actually happening is the exact opposite. Khameini realizes that sanctions and the conflict with the West have had enough of an impact on the Iranian public that the very chance of his candidates winning the next election is now in doubt. He recognizes that he has a problem, which is why he is shifting gears. He refuses to take any unnecessary chances, so he has separated nuclear development from politics. Advocates of diplomacy claim this as proof that sanctions really work, and effectively too. They are not only taking a toll on the Iranian government. They are even having an impact on its self-confidence.

Proponents of these two hypotheses each have legitimate arguments. Only history will judge which assessment was more accurate. The real question is what will happen if we discover that the pessimists were actually right? How will history act when we learn that the ayatollahs have missiles with nuclear warheads that can reach anywhere in the West? If that happens will anybody really care about some lively debate that took place in the first fifteen years of the millennium? It is far more likely that the whole debate be swept aside while governments rush to construct mass shelters against nuclear fallout.

All eyes are now on North Korea. They are also on Iran. America remains the leader of the free world. It’s the strongest superpower, and the only one that can do anything about this. Yes, it can. If Kim Jong-un keeps acting irresponsibly, it will send a clear message to Tehran that it doesn’t have much to worry about. On the other hand, if the United States sends the North Koreans an unequivocal message that there is a limit to the kinds of games it will tolerate, that message will reverberate all the way to Iran.

Similarly, if the United States does act after the next round of nuclear talks in Kazakhstan and after the elections in Iran, and it does so in a way that gets the ayatollahs to back off from their nuclear project, it will be much easier to rein in the North Koreans. What we are talking about is connected vessels, or more precisely, connected nuclear vessels. The conciliatory approach adopted by President Barack Obama during his first term was heard loud and clear, but its impact was a lot less noticeable on the ground. When the cat is away, the mice begin to play. Today’s world, four years and two months after Obama entered the White House, is a lot more dangerous than it was before he was elected.

Whenever you speak softly, you have to carry a big stick. Neither Tehran nor Pyongyang has seen that stick yet.