US restraint In Syria could aid Iran nuclear talks 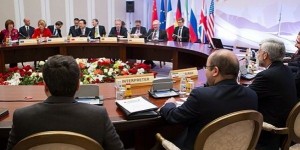 For the first time in years, the United States has seen a glimmer of hope in persuading Iran to curb its nuclear enrichment program so it cannot quickly or easily make an atomic bomb. Negotiations resume this week in Almaty, Kazakhstan, where encouraging talks in February between six world powers and the Islamic Republic ended in what Iranian diplomat Saeed Jalili called a “turning point” after multiple thwarted steps toward a breakthrough.

But Tehran is unlikely to bend to Washington’s will on its nuclear program if it is fighting American-supplied rebels at the same time in Syria. Tehran is Syrian President Bashar Assad’s chief backer in the two-year civil war that, by U.N. estimates, has left at least 70,000 people dead. Iranian forces are believed to be fighting alongside the regime’s army in Syria, and a senior commander of Iran’s elite Revolutionary Guard force was killed outside Damascus in February.

Russia also is supplying Assad’s forces with arms. And the U.S. does not want to risk alienating Russia, one of the six negotiating nations also seeking to limit Iran’s nuclear program, by entering what would amount to a proxy war in Syria.

The White House has at least for now put the nuclear negotiations ahead of intervening in Syria, according to diplomats, former Obama administration officials and experts. Opposition forces in Syria are in disarray and commanded in some areas by a jihadist group linked to al-Qaida. Preventing Iran from building a nuclear bomb remains a top priority for the Obama administration, which has been bent on ending wars — not opening new military fronts.

“I think that the United States has not taken a more active role in Syria from the beginning because they didn’t want to disturb the possibility, to give them space, to negotiate with Iran,” Javier Solana, the former European Union foreign policy chief, said Monday at a Brookings Institution discussion about this week’s talks. Solana, who was a top negotiator with Tehran in the nuclear program until 2009, added, “They probably knew that getting very engaged against Assad, engaged even militarily, could contribute to a break in the potential negotiations with Tehran.”

Solana also warned of frostier relations between Moscow and Washington that could scuttle success in both areas. “With Russia, we need to be much more engaged in order to resolve the Syrian problem and, at the end, the question of Tehran,” he said.

Adding to the mix is the unpredictable relationship between the U.S. and China, which has been leery of harsh Western sanctions on Iran and is expected to follow Russia’s lead on the nuclear negotiations. Without Russia and China’s support, experts say, the West will have little success in reaching a compromise with Iran.

“Resolving the nuclear impasse with Iran is the biggest challenge this year in the Middle East, and that requires careful handling of not only Iran, but Russia and China,” said retired Ambassador James F. Jeffrey, who followed the negotiations closely as the top U.S. envoy to Baghdad last year. “Decisions on Syria and other international questions certainly will be taken in this context.”

The White House refused comment, and a senior State Department official played down a direct linkage between the two national security priorities.

The negotiations have indirect, if wide-reaching, links to regional affairs that include Syria but also go beyond, including the U.S. military presence in the Persian Gulf, Washington’s uneasy detente with Baghdad and Israel’s undeclared nuclear arsenal — the only one of its kind in the Mideast. Iran has often said it wants to use the nuclear talks as a possible springboard for other negotiations on regional issues, such as its call for a nuclear-free Middle East — Tehran’s way of trying to push for more international accountability on Israel’s nuclear program.

Off-and-on talks between Iran and the world powers — the United States, China, Russia, Britain, France and Germany, known as P5+1 — began after the six nations offered Tehran a series of incentives in 2006 in exchange for a commitment to stop uranium enrichment and other activities that could be used to make weapons. Iran long has maintained that it is enriching uranium only to make reactor fuel and medical isotopes, and insists it has a right to do so under international law. Last summer, the U.S. and E.U. hit Iran’s economy and oil industry with tough sanctions to force it to comply.

But Iran has continued its program despite the sanctions. In February, in an attempt to move flagging negotiations forward, the world powers offered broader concessions to Iran, including letting it keep a limited amount of enriched uranium and suspend — but not fully close — a bunker-like nuclear facility near the holy city Qom. The world powers’ offer, which also included removing some of the Western sanctions, was hailed by Iran as an important step forward in the process.

Few expect any major breakthroughs in the negotiations beginning this week until after Iran’s presidential election in June.

Meanwhile, fighting in Syria has only intensified, and fears that Assad’s forces used chemical weapons on rebel fighters in March brought the U.S. closer than ever to sending military aid to the opposition. Yet Obama has resisted pressures from foreign allies, Congress and his own advisers to arm the rebels or at least supply them with military equipment, or to use targeted airstrikes to destroy some of Assad’s warplanes. The U.S. is helping train some former Syrian army soldiers — mostly Sunni and tribal Bedouins — in neighboring Jordan, which officials describe as non-lethal aid.

Part of Obama’s reluctance, officials say, is the fear that U.S. weapons could end up in the hands of jihadists affiliated with al-Qaida. Of top concern is the Jabhat al-Nusra, a wing of the Islamic State of Iraq which, in turn, blames Iran for supporting the Shiite-led government in Baghdad.

“Since we are now looking more at a pending regime collapse in Damascus that has a strong potential to turn it into a launch pad for transnational jihadism, Washington is more interested in a negotiated settlement, which involves talking to Iran,” said Kamran Bokhari, a Toronto-based expert on Mideast issues for the global intelligence company Stratfor.

Obama has been firm in his belief that Assad must go, and has predicted it will happen sooner than later. But he has been equally adamant that Iran must be stopped from acquiring nuclear weapons.

“A nuclear-armed Iran would be a threat to the region, a threat to the world and potentially an existential threat to Israel,” Obama said at a March 20 news conference in Jerusalem, flanked by Israeli Prime Minister Benjamin Netanyahu. “And we agree on our goal. We do not have a policy of containment when it comes to a nuclear Iran.”

Assad’s fall would strip Iran of its closest ally in the volatile Mideast and perhaps spur the Islamic Republic to aggressively pursue a nuclear weapon as it faces further isolation. At the same time, it could encourage Tehran to make some modest concessions on nuclear talks to relieve pressure from the West, said Gary Samore, who in February left the White House as Obama’s coordinator for arms control and weapons of mass destruction and is now at the Kennedy School of Government at Harvard University.

“You can argue it either way, but in the end I think the collapse of Assad makes a nuclear deal more likely, because the Supreme Leader (Ayatollah Ali Khamenei) will feel more isolated, under greater pressure, more likely to make tactical concessions in order to relieve further isolation and pressure,” Samore said Monday. “Of course, that is not going to change his fundamental interest in acquiring a nuclear weapons capability. I think it will confirm for him that the best way to defend himself against countries like the United States is to have that capacity