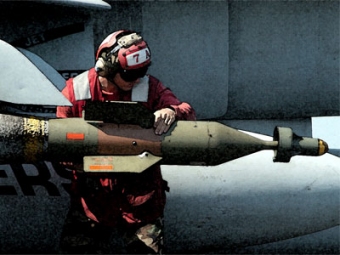 The High Cost of War with Iran 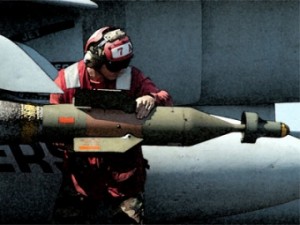 President Obama stated recently that Iran could develop a nuclear bomb in over a year. As negotiations over Tehran’s nuclear program continue to drag on with little sign of a breakthrough, the odds increase that an armed conflict will eventually break out. The chances are significant that the United States would either start or be sucked into this war. What would the consequences be? What are the alternatives?

The United States would make destroying Iran’s major nuclear facilities its primary aim, and it would likely be successful within hours of a conflict breaking out. Iran’s known nuclear sites are heavily defended or buried in the earth, but the U.S. arsenal contains aircraft that can penetrate the defenses and munitions that can penetrate the bunkers. Iran probably has other, smaller nuclear sites that are not known. If these are not identified and destroyed, they can serve as the building-blocks of a reconstructed nuclear program—or even enable an attempt at a rapid breakout. Still, there is little doubt that the United States could deal Iran’s nuclear program a massive setback.

This will not be the only front of a war, however. Iran’s leaders have threatened the West with retaliation too frequently and too publicly to simply ignore an attack. Iran has agents and allies that may commit acts of terrorism. Lebanese Hezbollah’s deadly bombing of a bus full of Israeli tourists in Burgas, Bulgaria and the discovery of a similar plot in Cyprus are examples of this capability. And assassination plots against Israeli diplomats in India, Georgia, Thailand and Kenya, as well as the Saudi ambassador in Washington, show Iranian willingness to commit acts of terrorism as part of its strategy.

Iran also has many small military speedboats, midget submarines and antiship missiles. It may use these to attack American vessels near its shores or to disrupt the flow of oil through the Strait of Hormuz. An oil blockade, if successful and sustained, would send shock waves through the global economy, as roughly a fifth of the world’s internationally traded oil passes through the strait.

But Iran’s leaders know that such a severe step would risk a severe response, and it is unlikely that they’d be able to effectively seal Hormuz. Thus, they are more likely to launch a sustained campaign of pinprick harassment—a missile here, a few floating mines there, spread out over hours, days and weeks. When combined with actions by Iranian operatives in neighboring countries and possibly by Iran’s ballistic missile forces, this will create uncertainty for any attacker—too violent to be peace, but not fully war. This state of affairs will put Iran on a more level footing with the United States, and will challenge U.S. policy makers to come up with an appropriate response. A sustained entanglement may result.

The economic impact of this kind of war would be negative. Regardless of how the conflict proceeds, there would be a significant spike in oil prices; if the war is not swift and decisive, the spike could last for weeks or months. The impact of this should not be underestimated, especially given the fragility of the global economic recovery. A $10 increase in the price per barrel of oil would take a billion dollars from American consumers in about five days. War could see oil between $150 and $200 per barrel. High prices would harm most states, although oil exporters outside the Persian Gulf region, like Russia and Venezuela, could see a windfall.

The economic fallout would drive much of the war’s negative political impact. Asian nations, which are the recipients of much Gulf oil, would be particularly unhappy. Washington’s European allies also would be divided at best. Relations with Russia and China would suffer most. Both states are alarmed by U.S. willingness to use force to reshape the strategic environment, and a major conflict with Iran could see the two taking steps to be an effective counterbalance. This could include helping Iran rebuild and rearm.

The unprecedented international sanctions regime against Iran would likely fall apart in the wake of a war. Some would loosen sanctions out of frustration with the United States. Some might yield to public pressure over images of Iranian suffering. The war’s oil-price shocks may tempt others to improve relations with oil-producing Iran. The net effect would be a reduction in Iran’s isolation.

A war thus has significant costs and dangers. Yet there is no guarantee that it would solve the Iranian nuclear threat. Iran can always rebuild its nuclear facilities. Being attacked by a superpower might convince Tehran that nuclear weapons aren’t worth the price. Yet it might also reinforce the case for getting a nuclear deterrent to make future attacks less likely. The strategic problem for the United States after the war would thus be the same as it was before: getting Iran to abandon the threatening elements of its nuclear program.

The United States might not start the war. Israeli prime minister Benjamin Netanyahu has been singularly determined to bring the Iran crisis to a swift resolution. The rest of the Israeli security establishment shares many of Netanyahu’s worries. If Israel strikes Iran on its own, and the United States is drawn in, the U.S.-Israeli relationship will likely suffer. Polls already show fading sympathy for Israel on the American left; an unpopular war could fuel this trend.

As counterintuitive as it may seem, Iran could also start the war. Certain hardline cliques within Iran are willing to engage in provocative actions. If a terror plot like that against the Saudi ambassador to the United States were to succeed, it would likely be seen as a casus belli. Further, Iran’s economic isolation is a source of tension that it could seek to alleviate by provoking instability.

Needless to say, inaction has its own costs. There is not yet any indication that Iran has chosen to build a bomb, but as its nuclear program steadily advances, detecting and stopping a rush to weaponize will become more difficult.

An Iran with a nuclear weapon will be better-equipped to resist the efforts of the United States and its allies in the Middle East. There will be fewer options if relations sour. Still, Iran isn’t likely to give atomic weapons to terrorists or launch sudden nuclear attacks—history suggests that even the most radical regimes that get the bomb, like Mao’s China, become very wary of using it. Iran’s leaders may sponsor terror, but they are not out to commit national suicide by provoking nuclear retaliation against their country.

Perhaps the biggest concern with an Iranian bomb is that it will end the nuclear nonproliferation regime and provoke a cascade of proliferation, not only in the Middle East but in South and East Asia, including South Korea and Japan. This would be a significant setback for the United States, which has long made nonproliferation a center of its foreign policy. The risk of a nuclear conflict would increase.

Still, the case for war with Iran is not very strong. Tehran’s nuclear ambitions will only end when its strategic anxieties are assuaged. A bombing campaign merely pushes the question back a few years. A more aggressive U.S. negotiating strategy is a better solution. Washington should link sanctions relief more closely to progress in talks, and coordinate this with the other sanctioning powers. It should consider offering an upgrade in relations with Tehran in return for the resolution of all nuclear issues. This would have to include an intrusive and sustained nuclear-inspection regime as the cornerstone of a deal. It should take a pragmatic view of negotiations: allowing very limited and closely monitored enrichment within Iran is far preferable to war, and is less risky. With steps like these, the United States can serve its own self-interest and avoid becoming tangled in another Middle Eastern war it cannot afford.

Note: Geoffrey Kemp and John Allen Gay are coauthors of  War with Iran: Political, Military, and Economic Consequences . Kemp is director of the regional security program at the Center for the National Interest and served on the National Security Council during the Reagan administration. Gay is an assistant editor at The National Interest.

By The National Interest