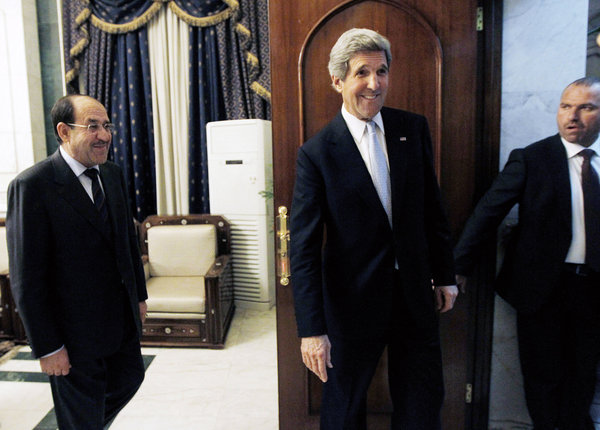 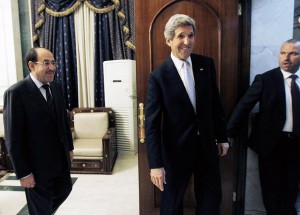 BAGHDAD – Secretary of State John Kerry pressed Iraqi Prime Minister Nouri Maliki on Sunday to stop Iran from flying arms across Iraqi territory to the beleaguered Syrian regime, but found him unwilling to give ground.

In a visit to Baghdad that was not announced in advance, Kerry told Maliki that the almost daily flights have become a lifeline for Syrian President Bashar Assad that is undermining the efforts of the United States and allies to negotiate the departure of Assad and an end to the 2-year-old war. And Kerry warned that many in the United States are wondering how, after Americans “have tried so hard to be helpful” in rebuilding post-Saddam Iraq, the country could stand in its way.

“The overflights from Iran are, in fact, helping to sustain Assad,” Kerry told reporters after the meeting, which he described as “spirited.”

But Maliki repeated Iraq’s view that there is no definitive proof that the cargoes are arms, rather than humanitarian aid, as the Iranians contend. Kerry was left to say that he will gather more information to prove his point.

The overflights have become an increasingly important issue for the Obama administration, which believes that they have reinforced Assad’s desire to stand and fight even as his military fortunes crumble. Vice President Joe Biden, former Secretary of State Hillary Rodham Clinton and other U.S. officials have unsuccessfully pressed the Iraqis to halt the flights, or at least begin ground inspections of the Iranian cargo.

“The number of flights shows that they can’t possibly be humanitarian flights,” a senior administration official, who declined to be identified citing the diplomatic sensitivity of the subject, told reporters.

But the Shiite-dominated Iraqi government, which worries that it could be next if Sunni rebel fighters sweep Assad from power, has conducted only two inspections since last year in response to American pressure. They say both of them revealed only humanitarian aid.

Some in Congress are outraged. At a House hearing last week, lawmakers told the U.S. ambassador to Syria, Robert Ford, that the United States should slap Iraq with unspecified “consequences” for acting as an arms conduit for the Iranians.

U.S. officials say they have no plans to penalize the Iraqis. Instead, they are offering them the incentive of a “seat at the table” in future international negotiations over the fate of Syria, if Iraq will cooperate in halting the arms traffic. U.S. officials argue this will give Iraq far more influence over the future of its western neighbor.

They warn that the war is already spilling across the border in ways that threaten Iraq. The senior official said Al Qaeda militants recently mounted an attack on a column of Syrian soldiers who had drifted across the border into Iraq. And there are reports of collaboration between Al Qaeda and the Nusra Front, a militant Islamist opposition group in Syria.

“That kind of thing easily gets out of hand and can threaten … Maliki and the Shiites in Iraq,” the official said.

Kerry’s visit comes at a moment when the administration has a list of worries about the direction of the Iraqi government but lacks the leverage it had when thousands of troops and billions of dollars in U.S aid flowed into the country.

While Kerry hailed the progress the country has made toward stability and prosperity, he also warned Iraqi leaders that they must overcome the differences that still divide its Shiites, Sunnis and Kurds.

Kerry pushed Maliki to reconsider its decision to suspend upcoming April elections in the two Sunni-dominated regions of Anbar and Ninewah. Maliki delayed the voting, saying Sunni demonstrations made it unsafe for election workers.

But in U.S. officials’ view, the delay would only further alienate Iraqi Sunnis, who already feel that they have too little control over the government that they dominated in the days of Saddam Hussein. The delay of the election “is a serious blow to enfranchisement,” said the senior administration official.

Kerry said after the meeting with Maliki that the Iraqi cabinet would reconsider the decision.

American influence over the country, or the lack of it, was the subject of a joke between the two leaders before their meeting.

Appearing briefly before photographers, Kerry joked to Maliki that Clinton had told him that the Iraqi leader is “going to do everything I say.”

Maliki shot back through the translator: “We won’t do it!”

Kerry, who has been deputized to try to find a new approach to Israeli-Palestinian peacemaking, offered reporters little hint at a news conference of how he intends to carry out that job.

He said he wouldn’t describe his talks Saturday with Israeli Prime Minister Benjamin Netanyahu andPalestinian Authority President Mahmoud Abbas except to say they were “open, candid and a good beginning.”